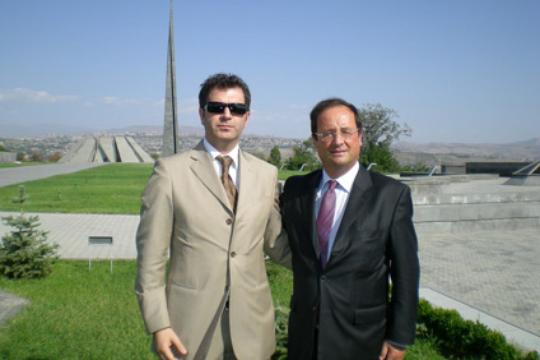 The First Armenian News and Analyses (FNA) talked to the expert on electronic propaganda, the head of the Armenian radio station “Ayb” Vardan Gabrielyan.

Mr. Gabrielyan, during the recent visit of Serzh Sargsyan to Paris the French-Armenians were complaining about the situation in Armenia where no favorable environment is provided to start a business. Are you familiar with their complaints?

The president had two visits, one in Paris, the Lion. I was present only in Paris and have not heard of any of these complaints. These complaints were not presented in Paris since Sargsyan had an official visit and was invited to meet the president of France. During the meeting the representatives from cultural life, politicians, and businessmen of Armenian decent were present but it would be inappropriate to discuss these issues with the president of France being present in the meeting. The diaspora has a lot of issues to discuss.

Which are these issues?

The diaspora mainly complains about the incumbent political structure of the country, the way it is governed, corruption on all the layers and the air of injustice that can be noticed by everyone who has at least once visited Armenia.

Are these the only reasons the representatives of the diaspora do not want to invest in Armenia?

Not only that. Armenia pays least attention to marketing to show which sectors could be mutually beneficial to invest in. Nothing is being done in the vine production and very slow steps are undertaken in goldsmith industry. The authorities in Armenia do not understand that investing a business must be mutually beneficial and not satisfy their own needs only. The diaspora is not properly aware and informed about the sectors that need to be fostered and the frustrations from 90-s have left a huge impact on the representatives of the Armenian diaspora.

A representative of an Armenian diaspora businessman Vahagn Hovnanyan wanted to commence a wheat production but he was warned that the business is in a monopoly in Armenia. Do you mean the similar cases?

Yes and no. Yes, if we are speaking about monopolies in the country. No if we mean a diaspora representative can have an access to the market. Making business means pursuing interest. Which sectors in Armenia can provide a benefit? Mine industry? Can we get into food importing market? What have they left for the Diaspora? 3.5 million people have reduced to 2 million or even less. How correct are the numbers of census? If we believe the census numbers, 84.000 people have left the country. How can a businessman start a business in a country which is constantly being emptied? If we want to open a laboratory in Armenia, on what shall we be basing our resources? There are numerous questions, but no answers. After 80 years we had a free country and started to destruct it from then on. All of us see that there are good things taking place in the country too. Road construction, etc.

Do you know French-Armenians or other Armenians in Diaspora who want to invest in Armenia but because of the unequal conditions they don’t do it?

I don’t know many people who want to do it, but instead I know a lot of people who are ready to return to their homeland Armenia, make investments and visit Armenia for developing Tourism. If Armenian government wants the Armenian-Diaspora to return they just shouldn’t announce about it and that’s all. They are not so naive in order to listen to the announcements, leave everything and return to Armenia. A positive change of conditions and atmosphere in Armenia will immediately change people’s opinion on our country not only in business, but also in various fields. But we should try to continue the investments that come to Armenia no matter what happens. For example to open a factory and give works for about 100 people, give all the conditions to villagers so that they will stay there and not leave for abroad. Armenian government must establish justice and equality, eliminate corruption not theoretically and formally, but practically. In order to have it, those officials who are now in Armenian government and have their participation in corruption, must leave the government. The elections should be fair and the politics should not interfere with justice. These are very simple steps which must be done in order to develop our country.

You may also know Armenians emigrated to France and other places, what is the real reason for doing it?

There are a lot of Armenians around us and they can say that they are doing it for several reasons. The reason for those who left the first was to see and live in a free world. There are a lot of people who were ready to sell everything they had in order just to have a visa and ticket money for leaving Armenia. People couldn’t find jobs in Armenia and they were hopeless, so they came here. Others understood that in Armenia they are not living but surviving so they left the country. So if these people have left Armenia it means that they didn’t see any future there, they couldn’t rely on the authorities, on the head of the country. The most important issue is that they don’t see the future of their children, and if it is so, then we are living in a violated system of government.

Yes, it is true. The Diaspora is being renewed which is an advantage for Diaspora since new people come with new energy, native Armenian speakers. New artists, scientists and other professionals are coming to Diaspora and strengthen it. But is it really what we want? Do we need to strengthen the Diaspora or return them to Armenia?

How would you comment on the statement made by Charles Andzavour who said that “white genocide” is realized in Armenia?

Aznavour mustn’t criticize the people who he had been walking with 10 years ago.