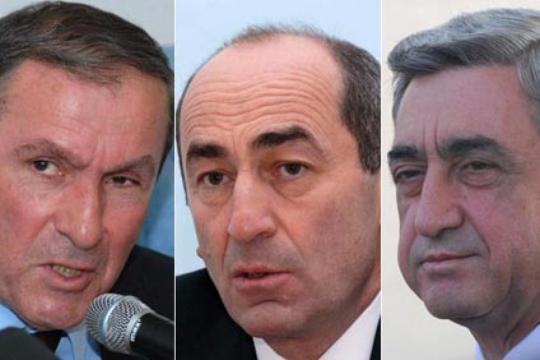 Self-confession of the presidents

Political analyst Aram Amatuni in his political analyses talks about Robert Kocharyan’s recent interview, saying that the second president by his comments showed the whole picture of Armenia of these 21 years. The analyst notes that it is strange that Armenia didn’t use the years of independence to correct the mistakes, but just opposite: it brought the country to a state where the independence itself is endangered. Amatuni notes that people wrongly think that election fraud is the only problem and is the basis for all the problems. But in reality, the problem is in authorities who are antidemocratic and antinational, because only that time, it could have elections like in our country.

The political analyst continues saying that we shouldn’t complain of anybody. Everybody can complain about the struggle between the three presidents except the three presidents. If at least one of them has the feeling of all that happened, then it is good, but it doesn’t seem like that.

There is no need to criticize anybody. In the end, the problem now is the current state of the country and for improving the situation we just need to be conscjous that for decades all generated perception were wrong, ineffective, and the country is under collapse. We have to struggle against the collapse.