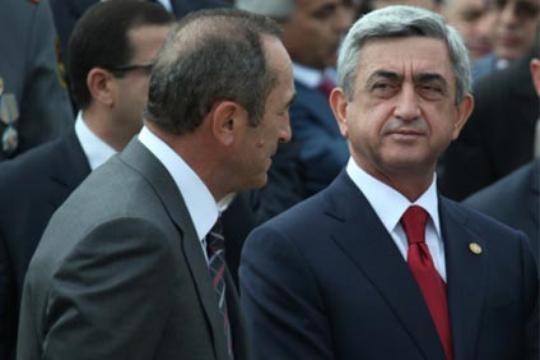 Political analyst Musa Mikayelyan in his recent article on the First Armenian News and Analyses writes:

“Yesterday while second Armenian president Robert Kocharyan was spreading his explanations about not participating in the presidential candidates, Serzh Sargsyan was having a consultation will all the representatives of the Government in the Defense Ministry. The incumbent president also presented his speech focusing mostly on the Army and on issues connected with foreign policy.”

The analyst notes that the speech was lacking the inner political problems and even the presidential elections. But maybe, according to the analyst, that would be too much as anyway the elections and inner political issues were in the context of the President’s speech.

The analyst continues, “It is difficult to say whether Sarzh Sargsyan knew that on January 15 Kocharyan is planning to give an interview and that’s why the consultation in the Defense Ministry was also scheduled on that very day. This could be the opposite too: R. Kocharyan could have known about the consultation and schedule his interview on that day.

This way or another, the struggle between two men from Karabakh obviously goes on and even though Kocharyan announced that he avoided the nomination in the elections not to have to go against Sargsyan, it is clear that even this announcement was part of the struggle. The whole problem is that because of their fighting with each other, the state is endangered. Moreover their struggle has almost nothing to do with the state’s problems. Those problems exist only as raw material for their text but in terms of agenda and objectives they are not prioritized for none of the parties.”