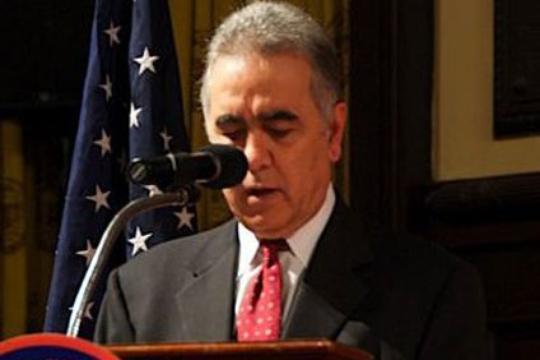 The publisher of The California Courier Harut Sassounian in his new article on Asbarez talks about the U.S. Defense secretary nominee Sen. Chuck Hagel who previously came up with announcements denying the Armenian Genocide. Sassounian in his article calls on Armenian Americans to urge to block the Senator’s confirmation unless he apologizes for his remarks.
Read the full article below:

Most political observers predict a contentious hearing in the Armed Services Committee and later in the full Senate on the confirmation of former Sen. Chuck Hagel, President Obama’s nominee as the next Secretary of Defense.
During his 12 years in the Senate, Hagel, a Republican, managed to offend a slew of constituencies, including conservative Senators of his own political party, as well as Jewish Americans, Armenian-Americans, Cuban-Americans, and gays.
In order to appease his critics and secure Senate’s confirmation, Sen. Hagel has been busy in recent days issuing retractions and apologies to various groups.
Upon learning of Hagel’s nomination, Jewish-American organizations harshly criticized him for being soft on Iran and hard on Israel, and for stating that “the Jewish lobby” in the United States “intimidates a lot of people.”

Sen. Hagel responded by telling The Lincoln Journal Star on January 7 that his record demonstrates “unequivocal, total support for Israel” and endorsement of tough economic sanctions against Iran. There is “not one shred of evidence that I’m anti-Israeli, not one [Senate] vote that matters hurt Israel,” Hagel told the newspaper.
The nominee also backed down from his opposition to ambassadorial nominee James Hormel in 1998 whom he had called “openly, aggressively gay.” He issued an apology last week to gay rights groups, stating that his earlier comments were “insensitive.”
However, the nominee for Defense Secretary remains unapologetic regarding his highly insensitive remarks on the Armenian Genocide.

During a press conference in Yerevan on June 2, 2005, Sen. Hagel expressed his opposition to a pending congressional resolution on the Armenian Genocide: “Historians and others should deal with it. But, I don’t think that the United States Government should become involved in the issue based on a resolution or any other way. What happened in 1915, happened in 1915. As one United States Senator, I think the better way to deal with this is to leave it open to historians and others to decide what happened and why.” This happens to be the exact position of the denialist Turkish regime on the Armenian Genocide.
Sen. Hagel went on to tell Armenian journalists: “The fact is that this region needs to move forward. We need to find a lasting peace between Turkey and Armenia and the other nations of this region. I am not sure that by going back and dealing with that in some way that causes one side or the other to be put in difficult spot, helps move the peace process forward.” These comments were simply intended to cover-up the Turkish crime of genocide.

Sen. Hagel’s pronouncements against the recognition of the Armenian Genocide are highlighted by his expressions of admiration for Mustafa Kemal Ataturk, the founder of the Turkish Republic, who continued the genocide initiated by the predecessor regime. It is not surprising that the Ataturk Society of America presented Sen. Hagel, the Ataturk Society’s Leadership Award on May 19, 2005, two weeks before going to Armenia and endorsing the Turkish government’s views on the Armenian Genocide.
Hurriyet newspaper quoted Sen. Hagel as making the following highly laudatory statement about the Father of modern Turkey in a 2008 speech: “Ataturk is one of the most valuable leaders of the 21st century. Children in the United States know nothing about this great leader. They should teach about him in schools and write about him in history books. Ataturk played a leading role in shaping today’s world.”

Armenian-Americans and human rights activists, who are deeply concerned about Hagel’s nomination, were quoted in an article by Adam Kredo in Washington Free Beacon titled, “Chuck Hagel has an Armenian Problem.” Here are some of their statements:

“On the eve of the Holocaust, Hitler mockingly asked, ‘Who, after all, speaks today of the annihilation of the Armenians?’ Not Chuck Hagel, apparently,” stated Rafael Medoff, Director of the David S. Wyman Institute for Holocaust Studies.
“What Chuck Hagel said in his press conference in Armenia in 2005 regarding the genocide of Armenians by Turks is shameful,” said Walter Reich, former director of the United States Holocaust Memorial Museum. “In his forthcoming confirmation hearings, senators should confront him with what he said and should expect him to address it.”
Hagel’s opposition to U.S. recognition of the Armenian genocide “betrays a shocking lack of moral leadership,” stated Thane Rosenbaum, Fordham University Law Professor.

Unless Sen. Hagel apologizes for his “insensitive” remarks on the Armenian Genocide, Armenian-Americans should urge the Senate to block his confirmation.