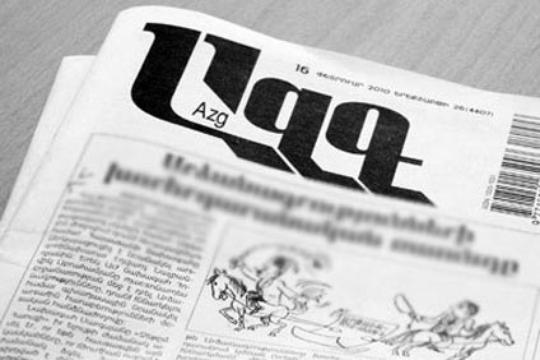 “Azg” daily not published. Court puts an arrest on the newspaper’s accounts.

After the Christmas holidays, “Azg” daily newspaper ceased its publication. Editor in chief Hakob Avetikyan told “First News and Analyses” that the court put an arrest on the newspaper’s accounts for its debts.

There was information in the press that “Azg” was closed, but Avetikyan denied that rumors. “That information is wrong, I do not know where it is from. The newspaper is not published, because we have some issues to determine with the tax authorities. We just were not able to fulfill our tax obligations, due to which fines and penalties increased. Now we specify the amount of the debt, which will be paid, and the newspaper will continue to be published. Probably, this Friday or, the latest, on Tuesday the newspaper will be published.” said Avetikyan.

It is known that the main shareholder of the newspaper is the head of the Union of Armenians of Russia Ara Abrahamyan and his brother. Avetikyan added that the shareholders conveyed a meeting and decided to pay the debt.