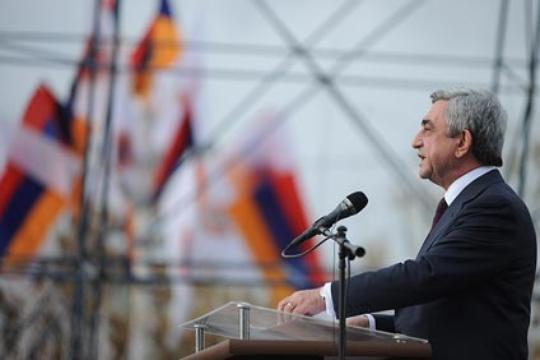 Despite the overall assessment of the upcoming presidential elections to be non-competitive, Musa Mikayelyan states in his political analysis that there is one opponent that is stronger than Sargsyan. This opponent is the current desperate state of the country which is a huge challenge for any president. Mikayelyan states no president in the world would love to have such an opponent as is the state of Armenia for Sargsyan. Armenia is getting empty, the investors decrease, there are developments around Armenia which need an intrastate mobilization of resources, but nothing happens because of the oligarchic clan which exploits all the possible resources in the country.

Mikayeklyan states Sargsyan can have 100% of the votes and declare himself the president of Armenia but it won’t change the situation. He will have to encounter the situation sooner or later.

To come out of the situation, Mikayelyan proposes two options: 1) either Sargsyan starts truly solving the issues that have deepened too much and hinder any kind of development, or the issues solve Sargsyan’s questions simultaneously solving Armenia’s questions.

Mikayelyan concludes in this matter the public does not have the right to be a watch on the situation and has to stand for Armenia not to let it lose to Sargsyan.