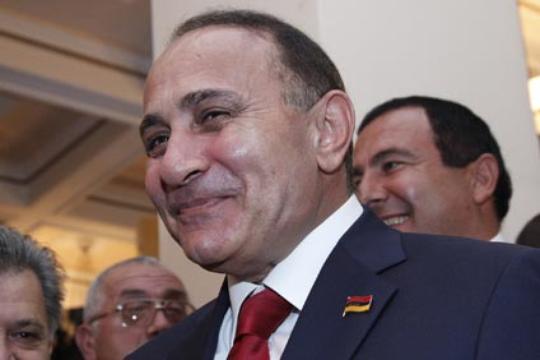 As reported earlier, a delegation led by the NA Speaker Hovik Abrahamyan will visit Brussels at the invitation of the European Parliament, where he will have quite representative meetings. Reporter of “First News and Analyses” Mousa Mikaelyan writes that the NA president is likely to try not to stay behind the rate of Armenia’s eurointegration, perhaps realizing that as a result of which he may left outside Armenian official circles.
The reporter notes that Hovik Abrahamyan will most likely try to represent himself as an active supporter of European integration, to level its failure during the visit to Russia in early December, while his collegue Tigran Sargsyan succeded having meetings with high-ranking U.S. officials.
Mousa Mikaelyan mentiones also other reason for Abrahamyan’s visit: to clean the tracks. The tracks rather poorly left in Brussels by the PAP leader Gagik Tsarukyan, Hovik Abrahamyan’s relative. “If before that Hovik Abrahamyan tried to present himself as a major “ideologist” of Tsarukyan’s decisions, now, after Tsarukyan’s downfall, he will try to be separated from him, as well as from those things that Tsarukyan could have spoken on behalf of Abrahamyan in Brussels.” writes the reporter.
The problem is that if Hovik Abrahamyan does not manage to get rid of Gagik Tsarukyan’s traces, it is very likely that Abrahamyan will have to follow that trace after Tsarukyan in the Armenian political process.