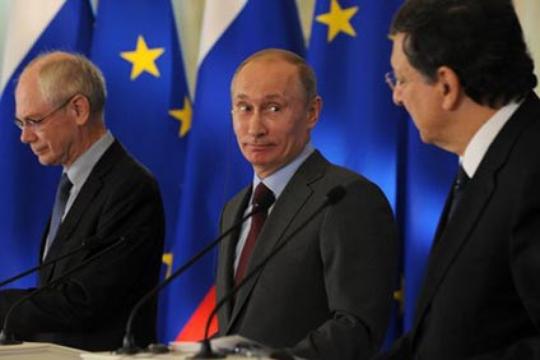 End of the EU-Russia Relationship, As You Know It. Dmitri Trenin

Below read Dmitri Trenin’s recent article on EU-Russia relations and Russia’s aim to position Moscow so as it has more influence in the world.
Trenin is the director of the Carnegie Moscow Center and also chairs the Research Council and the Foreign and Security Policy Program.

The EU-Russia summit last week in Brussels seemed almost routine. Gas, visas, Syria, and human rights were all on an agenda that proved largely fruitless. Yet, something is different and no one seems to have noticed. Relations between the European Union and its biggest neighbor are changing fundamentally.
The Europeans, of course, are focused on their own crisis and the restructuring that’s necessary to pull the continent back from the brink. Beyond their own union, they are mostly looking across the Mediterranean toward the Middle East and North Africa.

But it is Russia itself that is Europe’s biggest disappointment.
Until last fall, Europeans believed that then president Dmitry Medvedev was taking Russia in the direction they themselves desired and in the fashion they preferred by promoting modernization through gradually introducing the rule of law, encouraging innovation, and opening up more to the West. Chancellor Angela Merkel wanted Medvedev to succeed so badly that she publicly called him a candidate in Russia’s presidential elections in 2012 before Vladimir Putin had a chance to announce his final decision.

After Putin announced his plan to reassume control, the political mood in Europe began to sour. Europeans were briefly encouraged by the sudden rise in Russian protests last winter, but this was quickly lost when the Kremlin cracked down on protestors, opponents, and foreign-funded NGOs. Merkel has turned openly critical of Moscow and this week’s Economist placed Putin right in the middle of hell in the unholy company of Kim Jong Un, Bashar al-Assad, and Mahmoud Ahmadinejad.

Business is running and gas is flowing, but Russia’s behavior is unacceptable in Europe.
Something fundamental has changed on the Russian side, too. Putin believes Europe—and the West more broadly—is in decline, and wants to reposition Russia vis-à-vis the main centers of power in the twenty-first century. Moscow’s “European choice” proclaimed by Putin himself in the German parliament in 2001 has been replaced with a focus on Russia’s near neighborhood.

The idea is not to create a new empire, as Hillary Clinton has wrongly suggested—Moscow lacks the material resources, political will, and social drive for that. But the plan is to improve Russia’s bargaining positions with the two real centers of power in Eurasia: the EU in the west and China in the east. Longer term, Putin hopes for a new compact between the Eurasian Economic Union he is constructing and the European Union. Such a compact, however, should in his view be based on rough parity rather than a Russian association with the EU.

The change on the Kremlin side runs deeper than geopolitics or geoeconomics. Not only is the EU no longer accepted as a mentor—or even a model—but Moscow has also accepted the values gap argument that the Europeans were using for a long time, simply turning it against its critics. The decline of Europe, one hears in elite Russian circles, is due to the Europeans becoming too “soft” and giving up their former strengths that once made Europe the world’s leader in favor of multiculturalism, mindless tolerance, and dilution of national or religious identities.

The Kremlin harbors few illusions about Russia’s own values deficit as Putin focused on it in his address to parliament several weeks ago, but it has no appetite to follow what it considers a failed example. Rather, Putin approvingly cites the handling by the attorney general of Texas of a request from the OSCE to place its monitors at polling stations during the U.S. presidential election in November. The response: come to these stations and get any closer than 300 yards, and you will be arrested.

Putin, always a Russian nationalist, recently mounted a major campaign to stop or severely limit any political influence or interference in Russia from abroad. Moscow is now busy dismantling agreements with Western countries signed in the 1990s that Putin no longer sees as equitable, from USAID assistance programs to the Nunn-Lugar Cooperative Threat Reduction Program to children’s adoption.

This is more than a response to the Magnitsky Act just passed by the U.S. Congress, or a way to deter the Europeans from adopting anything similar. In fact, Putin himself has amplified the U.S. legislation by ordering government officials to transfer their private funds from abroad and park the money in Russia. This kills two birds with one stone—it reduces outsiders’ ability to pressure Moscow, and it places Russian officials under even tighter control from the Kremlin.

Russia famously “left the West” politically in the mid-2000s by veering off the U.S. orbit and reaffirming its strategic independence. Now, Moscow is “leaving the West” mentally by finally stopping to pretend that it shares the same values as EU countries and aspires to join them in some creative way.

By clearly dissociating Russia from the West—and the response to the Syrian crisis serves as a perfect example—Putin may be aiming to position Moscow to hold inescapable influence as the world scene reshuffles in the coming century. Russia is too weak to be a major power center on its own, but with strategic independence it may try to tip the scales of the global (or at least Eurasian) balance of power as it wants. If so, this is a serious change and the policy implications need to be carefully assessed.