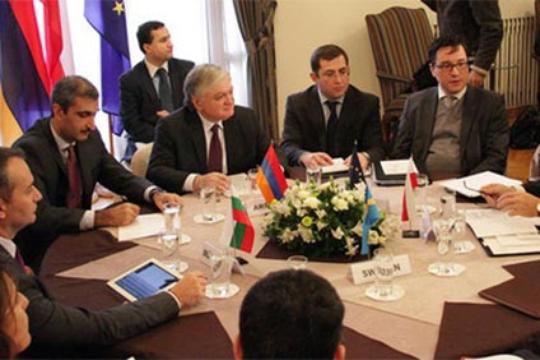 Edward Nalbandian’s statement and answer during the joint press conference with the Foreign Ministers of Poland, Sweden and Bulgaria

Armenia’s MFA disseminated the press release on Q&A with Edward Nalbandian December 14. Find the release below.

Today, we have quite a large-scale bilateral cooperation, based on the centuries-old friendly relations. We are cooperating on both bilateral and multilateral levels.

In particular, I would like to mention about the Eastern Partnership initiative, in the origins of which were Sweden and Poland, and currently together with Bulgaria and other countries they play an important role. We attach great importance to this initiative and very important steps have already been taken in that direction.

We have completed negotiations over the visa facilitation by the EU and we are going to sign it in the next few days. It would provide a great opportunity to the Armenian youth, students, cultural figures, businessmen, and representatives of sport and other spheres to more easily enter the EU countries.

We used the opportunity to discuss the upcoming summit in Vilnius, as well and touched upon a number of international and regional issues.

I informed my colleagues about the negotiations over the settlement of the Nagorno-Karabakh issue including the recent developments in the peace process.
Thus, I would like to conclude my statement and pass the floor to Polish Foreign Minister Radosław Sikorski.

Question, News.am: My question is addressed to the Armenian Minister of Foreign Affairs. Minister Nalbandian, after the Dublin meeting, the Azeri side is continually making statements accusing Armenia that the five–sided statement was not adopted because of the Armenian side. How would you comment those accusations?

Edward Nalbandian: I would suggest comparing the statements of the Foreign Ministers of Armenia and Azerbaijan in Dublin and you’ll see that everything stated by the Armenian Minister of Foreign Affairs is in line with the statement of the heads of the Co-chairing countries’ delegations.

And what is the Azeri Minister saying? They are saying, they are hearing. Let me recall that it is not the first time that the adoption of five-sided statement failed. There were similar cases before. One of the examples is the attempt to adopt a five-side statement in 2010 in Almaty. Yet, Azerbaijan was insisting on the importance, the predominance of the principle of territorial integrity over the other principles. The result was the failure of the adoption of a five-sided statement. But there was a trilateral statement where the Co-Chairs mentioned that all principles and elements proposed by the Co-Chairs were conceived as an integrated whole and no principle can be separated from the others, and no principle, no element can have predominance over the others.

This time, the Azerbaijanis, for some reasons, did not want to have all the three well-known principles – the non-use of force or threat of force, self-determination and territorial integrity, even mentioned. And what did they achieve? There was no five-sided statement, but there was a trilateral statement where the Co-Chairs mentioned about all those three principles. Moreover, Armenia welcomes the statement made by the Co-Chairs in Dublin and we can make the same statement.