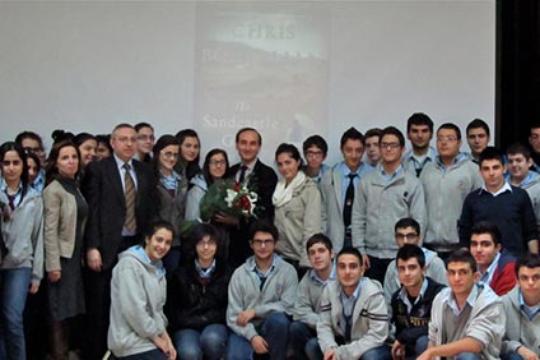 Chris Bohlajyan wrote the following article which was published in the US-Armenian “The Armenian Weekly” daily:

“We all have a little Forrest Gump in us. A bit of Leonard Zelig.
We’ve all had those moments when, suddenly, we are not merely witnesses to an instant fraught with meaning, but we are participants in the scene. We see ourselves both in the minute and with a cinematic distance: Camera pulls back wide to reveal the majesty of the spectacle, the sheer grandeur. And there, much to our surprise, we see ourselves. We are at once in the moment, and an observer of it.

1×1.trans Bohjalian: Forrest Gump Goes to Beirut. It wasn’t the most terrifying moment of my professional life, but it was up there. It was also, however, among the most moving.
The reality is that my visit to the Lebanese-Armenian community—my second in 2012—was rich in memories like that.

There was my visit to the Levon and Sofia Hagopian Armenian College—another high school, actually—in Bourj Hammoud. Friends of mine in the United States had told me that even though the Armenian students in Beirut might speak English, it was unlikely they would understand the nuances of my presentation. Not true. The very first question? A 16-year-old girl asked me, “Has writing this novel been healing for you personally? Emotionally?” Two other students had already finished the book by the time I arrived and wanted to discuss the ending with me with all the passion of readers in Los Angeles or Milwaukee or Watertown. I am not easily awed, but I was nervous. There are a variety of reasons for this, some grounded in the man’s profoundly important stature in the church, and others in the chasm-like gaps in my own religious training. Although my Armenian grandparents went to an Armenian church, my parents usually attended Episcopal churches in the New York City suburbs. Today I live next door (literally, right next door) to a Baptist church in Vermont, and have gone there happily for a quarter century. Nevertheless, my religious training has a long history of eccentricity. Exhibit A? Most of my training for confirmation when I was a 12-year-old at Trinity Episcopal Church in Stamford, Conn., revolved around Tim Rice and Andrew Lloyd Webber’s rock opera, “Jesus Christ Superstar.” To this day, I still know an embarrassing amount of the libretto.
In any case, the idea that I was going to meet His Holiness certainly got my attention when I received the invitation back in September. I learned key phrases in Armenian and I drove my friend Khatchig Mouradian, the editor of this newspaper, a little crazy with my obsessive-compulsive insistence on practicing precisely how much I should bow when I met Aram I. And I asked Hagop Havatian to share with me which of His Holiness’s books I should read prior to our meeting. I did considerably more homework than before I had been confirmed three and a half decades earlier.

Chris Bohjalian is the author of fifteen books, including the New York Times bestsellers The Night Strangers, Skeletons at the Feast, and The Double Bind. His novel Midwives was a number one New York Times bestseller and a selection of Oprah’s Book Club. His work has been translated into more than 25 languages, and three of his novels have become movies (Secrets of Eden, Midwives, and Past the Bleachers). Bohjalian’s novel of the Armenian Genocide, The Sandcastle Girls, hit bookstores on July 17.