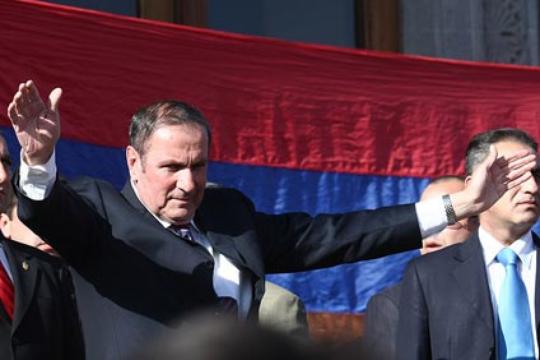 Aram Amatuni in his political analysis states if previously everyone was looking forward to Tsarukyan’s decision, not it is time for Ter-Petrosyan. Whether he will be nominated or not is considered differently. His vivid fans can state that Ter-Petrosyan is still capable to foster a strong opposition stand but the fact remains clear that Ter-Petrosyan has lost his once significant mobilization power. Amatuni believes the reason for Ter-Petrosyan failure is the artificial myth he formulated around his figure instead of thinking to promote a strategy that would walk the same path with the current changes and developments the country faces. He missed that point that is why he is where he is now.

As a matter of fact, Ter-Petrosyan was the one to initiate the current government criteria and values – a structure where everything is handed to a single person who must be either obeyed to or be harassed. Now Ter-Petrosyan’s participation is incapable of changing the situation despite his small but firm followers’ group. Instead it will form a chaotic state which will suit no one but Sargsyan first of all, Amatuni believes. This makes clear, that Ter-Petrosyan’s participation will contribute either to Sargsyan or to the whole incumbent government thus completely destroying Ter-Petrosyan’s reputation in the public eye. Compared to what was in 2008, Sargsyan this time my even offer Ter-Petrosyan a second round for the elections but only in case he is fully confident of his stability in the situation. This proposes that the second-round election proposal is nothing but another deadlock for Ter-Petrosyan just as it is a deadlock not to propose a candidate from the ANC.

Amatuni concludes both cases are difficult. In case any other person is nominated, it will cause a chaos inside the ANC but as far as Ter-Petrosyan still has the power to mobilize at least the ANC members, he still has the chance to be nominated.