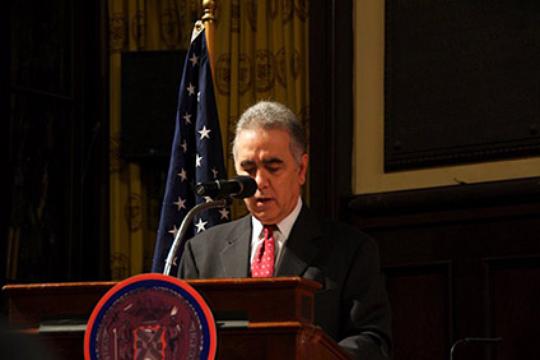 Reflections of a Righteous Turk: Can Germany be a Model for Turkey? Harut Sassounian

If it were possible to clone prominent Turkish commentator Orhan Kemal Cengiz and make multiple copies of his kind heart and righteous conscience, the Turkish government would then be able to come to grips with Armenian demands from Turkey in a humane and just manner.

Cengiz visited Germany recently with a group of Turkish journalists and human rights activists at the invitation of the European Academy of Berlin with the financial support of the German Ministry of Foreign Affairs. The Turkish visitors participated in a conference titled, “Difficult Heritage of the Past,” on how today Germans faces crimes committed by Nazis.
After returning to Turkey, Cengiz wrote two poignant articles published in Today’s Zaman: “Can Germany be a model for Turkey in confrontation with past atrocities?” and “Turkey and Germany’s past atrocities.”

Cengiz confesses that before his visit, he thought that “Germans were forced to look at their troubled past by external powers who had them on their knees after World War II.” He wonders whether Germany could serve as a model for other countries in facing their past voluntarily. To his surprise, the Turkish columnist discovered that even though Germans had begun confronting their past after a devastating defeat, they were determined to create a new country “based on an endless process of remembering, commemorating and confronting the past.”
The righteous Turkish writer was “extremely impressed and touched” seeing a brick wall in a Berlin kindergarten. Every year teachers would ask students to identify themselves with Jews who once lived in the neighborhood before being killed by the Nazis. The students would then write the Jewish names on bricks and put them on top of each other forming a wall. It became clear to him that “remembering has become a part of daily life in Germany.”

Cengiz hopes that someday Turkish “children would do a similar thing. I imagined children in İstanbul building a wall by writing on bricks the names of Armenian intellectuals who were taken from their homes on April 24, 1915 and never came back again.” He is convinced that “confronting the past is a clear state policy here in Germany. Museums, exhibitions and the school curriculum all show how the state apparatus invested in this endeavor. So little by little I started to realize that Turkey can significantly benefit from the German experience on this difficult terrain of confrontation with the past.”
In his second article, Cengiz boldly describes the 19th and 20th centuries as “centuries of genocide,” which included the Armenian Genocide. He explains that contrary to the mass crimes committed by other nations, the ones perpetrated by Germans and Turks were against “neighbors with whom they had lived side-by-side for centuries. I think this alone is the most distinctive element of the German and Turkish example. … When you kill your neighbors, it creates a black hole, a gap in your national identity.”

In seeking to emulate the German experience, Cengiz hopes that he would see memorials erected in Turkey about “Armenian massacres, pogroms targeting Jews and Greeks, massacres targeting Alevis and others. When Turkey starts to remember and commemorate past atrocities, the Topography of Terror Museum, which is built on a former Nazi headquarters, the Jewish Museum of Berlin and others might be good examples to follow…. Turkey has a lot to learn from Germany in coming to terms with past atrocities.”
While Turkey’s acknowledgment of the Armenian Genocide is long overdue, the actual process of reconciliation could begin by removing the names of the Turkish masterminds of the Armenian Genocide from schools, streets and public squares throughout Turkey. The Turkish government should also dismantle the shameful mausoleum of Talaat in Istanbul and replace it with a monument dedicated to the Armenian Genocide. It should also pay billions of dollars in compensation to descendants of Armenian victims, similar to German payments to Jews. Most importantly, Turkey should return to Armenians the occupied territories of Western Armenia!

Germany too, as Turkey’s close ally in World War I, has an obligation to Armenians — the acknowledgement of its role in the Armenian Genocide. It should apologize and make amends to the Armenian people. Only then would Germans fully deserve the praise heaped upon them by Orhan Cengiz for honestly facing their past.
While Turkey’s genocidal precedent served as model for Nazi Germany in committing the Holocaust, it is now Germany’s turn to become a role model to Turkey for reconciling with its genocidal past.