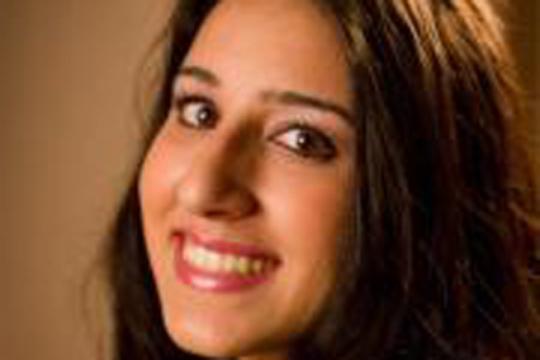 Young Pianist’s Love for music and dedication put her on path to success. The Armenian Mirror Spectator

At age 17, Alina Israilian has already accomplished what most serious pianists only dream of: playing at Carnegie Hall — at age 11, no less.

“It was everything I’d dreamed of in one place,” she recalled.

In addition, she has been a recipient of the McGill Conservatory Vera Black Scholarship for the last two years. Yet despite these accomplishments, Israilian’s warm, welcoming smile and jovial demeanor have not changed.

Born in Toronto and raised in Laval, Montreal, Israilian attended her first piano lesson at the age of 4, under the direction of Tina Kakabedze. In 2003, at 7, she participated in her first piano competition; two years later, she won the second place prize in the 9-year-old category at the Canada Music Competition. At the 2006 World Piano Competition in Cincinnati, she placed second, and was awarded the prize to play at Carnegie Hall. “It was very exciting. I don’t think I was aware that I was playing at Carnegie Hall, but now that I look back, it’s, ‘Oh my God, I played there,’” she recalls.

To top it all off, she has taken some master classes from renowned pianist Anton Kuerti and Prof. Marc Durand.

Israilian’s musical heroes are pianists Vladimir Ashkenazy, Martha Argerich and Jan Lisiecki. She enjoys playing pieces from the Romantic Era, and says that she recently “started to expand my view on classical music, from the Classical period” after playing Beethoven’s Third Piano Concerto. While her favorite piece to play is Chopin’s Etude No. 3, she noted she would love to learn Brahms’ First Piano Concerto.

Israilian says her parents are her inspiration, acknowledging the invaluable role they have played in her career. “They encourage me a lot. They’re great supporters. They just love music,” she says. “We attend concerts together, we share opinions on concerts, everything.”

She says her father often reminds her to live in the moment and take advantage of the time she has now: “When there’s an opportunity, I have to open my eyes…if I really want something, I should go get it.”

Israilian hopes to inspire young musicians to commit to their goals and remain optimistic. She adds more to the generic response of “try your hardest and dream big.” She advises those seeking a career in music to “always practice. After the practice there’s always something good that comes out. … If they work hard when they’re young, when they’re older they can look back and they’ll live the life they always wanted.” In fact, she cites an anecdote from her own experience to prove how much she values practicing. While preparing for the Canadian Music Competition, Israilian, who was 12 at the time, began feeling pain in her hands from playing the big chords in Rachmaninoff’s Second Piano Concerto. After a visit to the doctor, Israilian was forced to change her piece, with only two months left before the competition.

During that time, Israilian practiced diligently. “I was determined, I was motivated, and I got the piece, it was ready… I played it at the competition and I really liked my performance. That just proved that if I practice and if I set my mind to something, I could really get some good results. And anything is possible if you practice

hard,” she said. A recent graduate of Ecole Internationale (high school) in Laval, Israilian is currently pursuing a double major in university. She studies music at the Conservatoire de Musique de Montreal under the guidance of Andre Laplante and business at Marianopolis — an odd combination indeed. Israilian is not interested solely in the performance aspect of being a pianist. She is curious about the “behind-the-scenes” portion of staging a concert, and believes a business degree will enable her to do her own marketing and managing. Although the business studies are usually completed in two years, Israilian has opted to spend three years on the program “so that I can focus more on music.”

When she is not at the piano — she anticipates spending up to 5 hours a day practicing this year — Israilian enjoys traveling, hiking and reading. She windsurfs, too, when on vacation in a tropical island. On top of that, she plays another instrument — a vocal one. She sings in the Nor Dzaghig (New Flower) Armenian choir.

Israilian has also been a member of the Garni Armenian dance group for the past five years.

For Israilian, the best part of being a pianist is playing both solo and with an orchestra. “When I play with the orchestra, I feel like I’m guiding this music and there are 40, 50 musicians following my lead…Playing solo, I get into my own bubble, my own world … and make the best music I can. I just love it.” She only wishes that more people would appreciate the beauty of classical music. “I just find it too bad, you know. It’s a great thing, classical music.”

Israilian plans to participate in more competitions this coming year, including international ones. She hopes to have the opportunity to play at a concert with her younger sisters, who play the piano and violin.

In the meantime, Israilian is living by the wise words of her father. “I’m never going to be, say, 17 again. I have to take advantage of the time I have now. It’s a great age; I can accomplish a lot.”

By Serena Hajjar Special to the Mirror-Spectator