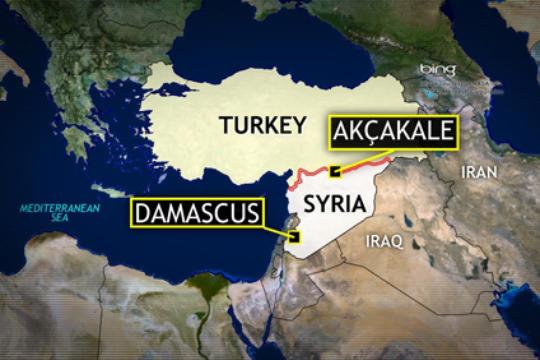 Turkish Zaman touched upon Turkey’s and Saudi Arabia’s involvement in the Syrian crisis. Find the article below.

Syria is strategically very important. But the fight for Syria is a prelude to Sunni primacy in Iraq.

All the neighbors of Syria have a stake in who will win this civil war. But for Iraq’s Shiite regime, a Sunni dominated government in Damascus has much deeper implications. The risk is nothing less than regime survival in Baghdad. When Iraq’s Shiite prime minister looks at Syria, he is reading the first chapter of a book titled “the Sunnis are coming for Baghdad.” He must be wondering why the Arab Sunni regimes, especially Saudi Arabia, Qatar and the other Gulf countries, are arming the Sunni rebels in Syria. Is it because Saudi Arabia wants to support a democratic revolution for political rights and freedom in the heart of the Arab world? Wouldn’t it be counterproductive for Saudi Arabia to support the Arab awakening? Let’s not forget how Saudi Arabia reacted when Washington decided that it was time for Egyptian President Hosni Mubarak to go. This is the Middle East. Everything is about power politics. And at the center of Middle Eastern power politics today lies the Sunni-Shiite rivalry.

If you want to apply a balance of power paradigm to what is taking place in Syria, the picture is crystal clear: This is a proxy war between Iran and Saudi Arabia. But let’s not forget that the real proxy war between Iran and Saudi Arabia took place in Iraq between 2004 and 2006. Iran won that war. In the eyes of the Sunni Arab camp, Washington handed Baghdad to Tehran on a silver platter. This was a strategic mistake of unimaginable proportions for which Saudi Arabia will never forgive the United States.

Where does Turkey fit in that picture? In the past Ankara tried to transcend the Sunni-Shiite rivalry. When Turkey’s prime minister visited Iraq a few years ago, he went to Najaf and gave conciliatory speeches. But since the Syrian uprising began, things have radically changed. Now, Ankara is unambiguously in the Sunni camp. In Washington, Turkey is perceived to be in the same camp as the Muslim Brotherhood. Ankara’s problem is not confined to the Alawite regime in Damascus. There are also growing tensions between Ankara and Baghdad as well as between Ankara and Tehran. In the eyes of Ankara, Iraq’s prime minister, Nouri al-Maliki, is Iran’s man. Turkey’s improved relations with Iraqi Kurds and its pro-Sunni stance in Iraq is a source of major tension in relations with Baghdad.

As a result, Saudi Arabia and Turkey find themselves in the same camp in Iraq and Syria. But there are also critical differences between Turkey and Saudi Arabia when it comes to Syria. As previously mentioned, Saudi Arabia has no interest in democratization in the region and in Syria. As an authoritarian theocracy, Saudi Arabia is very nervous about the Arab awakening. The only reason Saudi Arabia supports the Syrian rebellion is because it wants to see Sunni hegemony in Damascus. Turkey, on the other hand, has, despite all its imperfections, the most democratic and most secular political system in the Middle East. In the eyes of Ankara, the Arab awakening is not a challenge or a danger. It is an opportunity to forge a better, more organic and constructive relationship with like-minded populist democracies in the region. The fact that most of the newly emerging Arab regimes refer to Turkey as a source of inspiration enhances Ankara’s soft power. Turkey and Saudi Arabia, despite being in the same camp in Syria, make for strange bedfellows. They are together in Syria for very different reasons. Ankara truly wants democratization in Damascus. Saudi Arabia, however, is only interested in Sunni hegemony and sees Damascus as the gate that opens up into Baghdad.