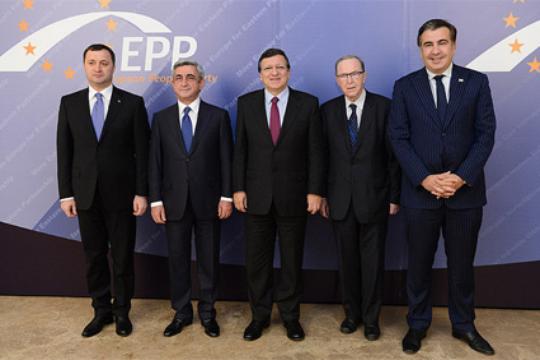 Aram Amatouni, in his political analysis, writes that the EPP summit is a really important event for Armenia, especially considering that it’s was a chance that the president of the European Commission to visit Armenia. Today Jose Manuel Barroso will give a press conference with Serzh Sargsyan, which will be certainly presented as Sargsyan’s PR.

“In general, it is obvious that the President is trying to avoid internal political developments and to show that he is busy with more important, higher-level, and global issues. The aim of it, of course, is that the President wants to demonstrate that he is a higher figure than those trying to unite against him. But, on the other hand, the existing internal economic and social issues in Armenia are in an extremely difficult situation. They should understand that foreign policy of any country is strong due to its internal one.”

According to the reporter, EPP summit is an important event in the life of Armenian people, but the level of people’s lives are so hard and heavy that perhaps they are not interested in the cost of this event. On the other hand, the key to solve many of the problems is the European Integration.

“People must not view the European integration of Armenia only on the level of the activities of authorities, but also consider its strategic objectives and priorities. After all, if it is just one of political risks for the government, for the society European Integration is perhaps the only practical way to overcome the crisis.” concludes Aram Amatouni.