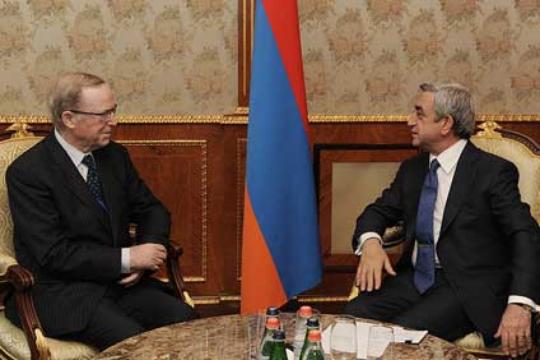 Department of Public and Media Relations of the RA President inform that President of Armenia Serzh Sargsyan received President of the European People’s Party President Wilfried Martens. EPP president has arrived in Armenia to attend the summit of the leaders of the Eastern Partnership.

At the meeting both parties expressed satisfaction, although the Republican Party of Armenia is relatively new member of the EPP, however, during the past year after joining, active and effective cooperation was formed in the framework of the EPP.

President Serzh Sargsyan and EPP President Wilfried Martens found such meetings as a good opportunity to discuss the progress of Armenia towards European integration, for inter-party relations and exchange of ideas.

They also referred to the upcoming presidential elections, the issues related to the development of cooperation within the Eastern Partnership.