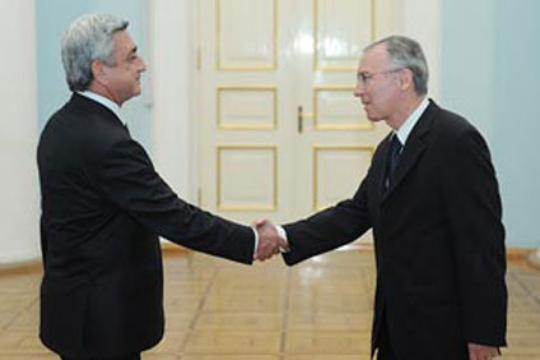 Serzh Sargsyan congratulated the Ambassador on the appointment and on the start of dipllomatic mission and expressed hope that he will actively contribute to the strengthening of friendly relations between the states.

The president stressed that the Armenian-Greek relations are based on centuries-old and historically formed traditions, and Armenia is interested in maintaining and developing these relationships.

Ambassador Taghis assured that will spare no effort to serve for the country and will use the best of his abilities and powers for the sake of friendship between the Armenian and Greek people and for the strengthening the ties between the two countries.
He noted that President Serzh Sargsyan’s state visit to Greece in 2011, re-warmed relations between Armenia and Greece.

In conclusion, the President wished success to the Ambassador of Greece in his important mission.