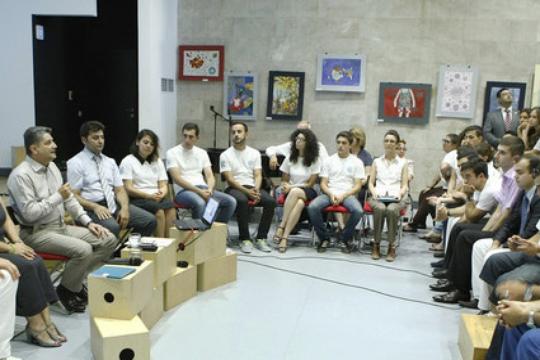 Armenia should use all the opportunities to ensure maximum integration with Georgia, Turkey, Iran and Azerbaijan. Prime Minister

“1in.am News and Analysis” was informed from the press service of the Government of Armenia that the Prime-Minister Tigran Sargsyan called at AYB high school to deliver a lecture for “Luys” Foundation-supported students, entitled “The Armenian World.” He touched upon the changes going on in the world and in that context focused on the tendencies of the development of Armenia and regional processes.

Tigran Sargsyan said that Armenians worldwide constitute Armenia’s development potential thus the country must create such new methods that will give an opportunity to unite the Armenians and multiply the organized power of our nation.

“In this respect, there are a number of important tools, including “Luys” Foundation, the principle of public-private sector partnership and the National Competitiveness Council, which is made up of successful Armenian businessmen from different countries. The Council seeks to increase our national competitiveness under the aegis of the Armenian world,” Tigran Sargsyan said.

The Prime Minister noted that currently there are very few countries in such a difficult situation as Armenia, which has no sea, no diplomatic relations with two neighboring countries, Azerbaijan and Turkey. The international sanctions against Iran are making the situation in Armenia more difficult. The head of government said Armenia could develop faster through integration and market expansion. The country should use all its assets in order to achieve maximum integration with Georgia, Azerbaijan, Turkey and Iran. “However, considering that the normalization of relations with Turkey and Azerbaijan is quite a difficult problem, we will have to rely on internal resources and the Armenian world,” the Prime Minister emphasized.

Since July, 2012, 150 students from “Luys” Foundation have been volunteering in 10 communities of Armenia and Artsakh under the “Develop Armenia” program. They took the opportunity to represent their work to the Prime Minister.