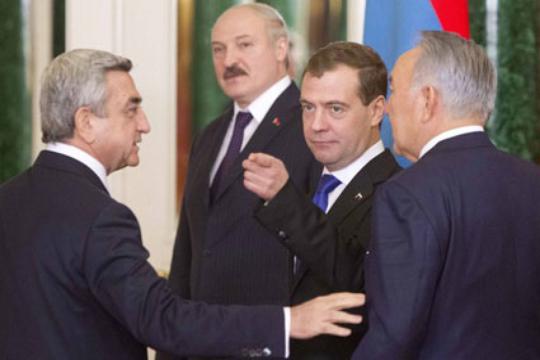 The Need for Lustration

Russia is evidently starting to increase the pressure on Armenia for adopting Putin’s idea of the Eurasian Union which is nothing but the modification of the Soviet Union. Russia’s high ranking delegations are coming to Armenia one by one. Among them were the head of Rossotrudnichestvo, Putin’s delegate Kosachev, Chairman of the Federation council Matviyenko, Chairman of the State Duma Naryshkin, also the minister of internal affairs of Russia.

There is no doubt many will still come, but it is understandable that only due to those who are coming and going the idea is not going to be accepted in Armenia. The idea is going to be moved forward by the ones, who are already in Armenia, by the ones who are always here, but who act the way it is told from there. Russian delegations will be seen only as controlling committees, inspectors, who will check everything that has been done in Armenia, will point to what still needs to be done and will assess the situation.

Thus in this situation, it seems there again rises the need for lustration in Armenia as an essential step for strengthening the national security and sovereignty of the country. That step should be taken based on the national interests of Armenia.

As we know last year the Heritage party raised that initiative in the National council, but as it was expected, the idea was rejected by the coalition forces. There is no doubt that in case of a new initiative it is also going to be rejected as not only the Republican party and Prosperous Armenia are against Lustration, but Armenian National Congress also doesn’t approve that idea.

The thing is, if with the help of the political power it is impossible to protect country’s national security and sovereignty, it should be done through the society, with the help of the social opinion. It is the high time to put the idea of Lustration for the public discussion; at least it is the time to discuss. The same way political forces and the authorities talk about the Eurasian Union, they propose just to discuss the idea and there is no need to reject it. The same way lets’ discuss the idea of Lustration, which also has a contextual direct link to the idea of Eurasian Union, because through that idea Putin indirectly but openly talks about the restoration of the Soviet Union. Thus if we are discussing it, then Lustration also must be discussed.