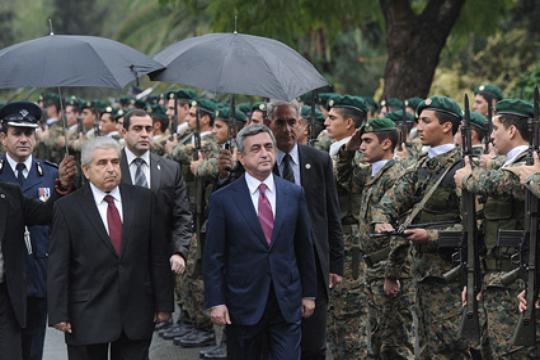 Armenian President Serzh Sargsyan has expressed his country’s will to further deepen its relations with Cyprus, noting that conditions and possibilities to this end exist.

He also made a special reference to the Armenian community of Cyprus.

Speaking during a meeting with House President Marios Garoyian, Sargsyan reaffirmed his country’s firm positions on the Cyprus problem.

An official press release issued here said that Garoyian said that the Armenian President’s visit to Cyprus makes the people of Cyprus, and particularly the Armenians living in Cyprus, happy. The excellent and fraternal relations between Cyprus and Armenia are enhanced rapidly in all fields, both on bilateral and inter-parliamentary level, he added.

Garoyian underlined that Cyprus supports Armenia in its struggles as Armenia supports Cyprus’ cause. He thanked the President of Armenia for the long standing support of his country to Cyprus and the efforts for a Cyprus settlement, underlining the need for cooperation of the two countries to address common challenges.
FinancialMirror.com