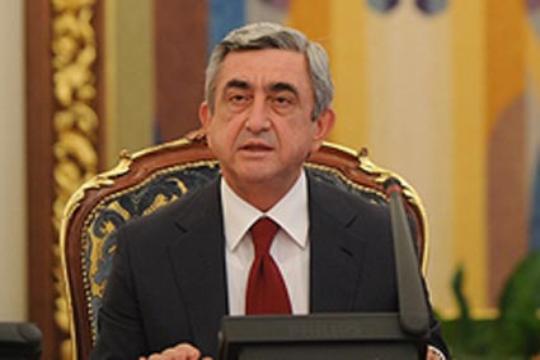 Serzh Sargsyan received the representatives of the ADL’s executive body

President Serzh Sargsyan met the representatives of the Democratic Liberal Party’s (ADL) executive body, headed by the Chairman of the Department Hakob Avetikyan. “First News and Analyses” has learned that from the President’s official website.

The representatives of the governing body of the Democratic Liberal Party, which have been recently officially registered in Armenia and is the successor of DLPA and Armenakan-ADL, presented to the President the party’s future plans, talked about the intention to begin active political life in Armenia, and to see the party united in the Diaspora. The participants asked the President about the economic, foreign policy and political life of RA, some questions regarding the state of our compatriots living in Syria and expressed proposals concerning their support.
ADL officials expressed hope that their union in the motherland and political achievements can contribute to the consolidation of the Diaspora.

They noted that the ADL has decided to actively engage in political life, participate in local and state elections, and the party has already made the first steps, by nominating their candidates at the upcoming local government elections,