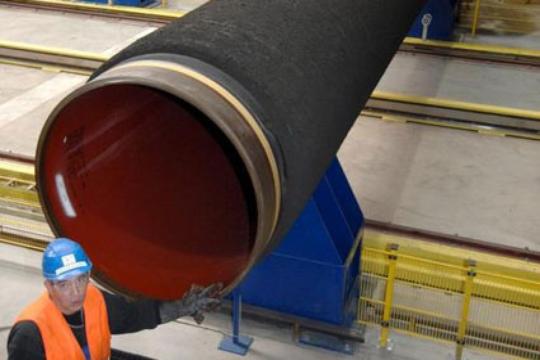 The European Union and Azerbaijan signed a deal Thursday in which the Caspian country commits to supply Europe with “substantial volumes of gas,” an agreement the EU said was an important step to reduce the bloc’s dependence on deliveries from Russia.
However, Baku has not yet decided whether the EU-backed Nabucco pipeline project will get the award from the big Shah Deniz II gas field, or whether the contract will go to smaller rival projects.
Moscow’s disputes with Ukraine and Belarus have in the past cut off supplies to Central and Western Europe, making European policymakers keen to develop alternative routes to get their gas. Currently, the EU gets about 40 percent of its natural gas from Russia.
“This is a major breakthrough,” European Commission President Jose Manuel Barroso, who signed the agreement with Azeri President Ilham Aliyev in Baku, said in a statement. “This new supply route will enhance the energy security of European consumers and businesses.”
In the agreement, Azerbaijan promises the EU to provide sufficient gas to enable the creation of the so-called Southern corridor — a route from the energy-rich Caspian basin to Europe that bypasses Russia. The infrastructure will be provided together by Europe and Azerbaijan, the EU said in a statement.
Currently, several pipeline projects are competing to create the Southern corridor. The EU has thrown its weight behind Nabucco, a massive 3,300 kilometer pipeline proposed by a consortium of firms led by Germany’s RWE AG that could move up to 31 billion cubic meters of gas a year from Baku all the way to Austria.
But in recent months, the 27-country bloc appears to have softened its position on what pipeline to support.
“For the EU it’s decisive that a European project and a European firm gets awarded this contract,” said Marlene Holzner, spokeswoman for the EU’s Energy Commissioner Guenther Oettinger, who was in Baku with Barroso.
In its statement, the EU said that Azerbaijan will decide in the next months which project would get the award for the Shah Deniz II field. The bloc hopes to have a commitment by March, the month a euro200 million ($266 million) support package the EU has promised Nabucco expires if there’s no investment decision. The EU’s package would only cover a fraction of the pipeline’s estimated euro7.9 billion cost.
In addition to Nabucco, there are a number of smaller pipeline projects. ITGI — backed by Italy’s Edison SpA, Greek gas company Depa and Turkey’s Botas — would take gas from Turkey’s border to the southern heel of Italy, while the Trans Adriatic Pipeline — proposed by Switzerland’s EGL, Norway’s Statoil ASA and German E.ON AG — plans to go from Greece, across Albania and the Adriatic Sea to Italy.
Both ITGI and TAP would rely on Turkey’s existing pipelines to get the Azeri gas to EU borders.
Many energy experts have long questioned the feasibility of Nabucco, arguing that there is not enough gas in the Shah Deniz field to make the project commercially viable in the coming years and that getting gas from Turkmenistan or Iraq — two other potential suppliers for Nabucco — will be difficult.
“We do not see enough gas available for a pipeline as big as Nabucco before 2020,” said Jonathan Stern, director of gas research at the Oxford Institute for Energy Studies. “The small projects seem to me to be more the right size for what can be done this decade.”
According to the institute’s estimates, until at least 2018, Shah Deniz II would be able to ship a maximum of about 10 billion cubic meters of gas to Europe — less than a third of Nabucco’s full capacity.
For the question whether the Southern corridor will actually become a reality anytime soon, Thursday’s agreement “is not really groundbreaking,” said Alexandros Petersen, a Eurasia expert at the Atlantic Council is Washington. “The real story is what project of the Southern corridor the Azerbaijanis are going to pick.”