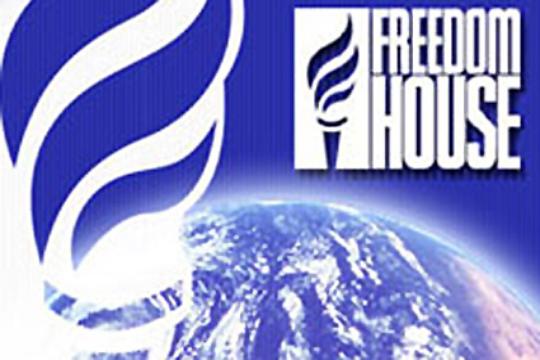 The newly released annual report of Freedom House (FH), analyzing the democratic trends of 2010, reveals that most of the former Soviet states are moving towards authoritarian governance.
According to FH, since 2001 the region as a whole demonstrates continuous decline in political rights and civil liberties. Moreover, FH finds that freedom worldwide suffered its fifth consecutive year of decline.
All of this is more or less predictable. The only surprise is to see the rating of the Nagorno Karabakh Republic. For the first time ever, NKR is listed in the “not free” group together with Azerbaijan; whereas for years before NKR was considered “partly free.”
FH cites purported absence of opposition parties at the May 2010 parliamentary elections as the only reason for this downgrading.
This claim is incorrect. Two opposition parties – the Dashnaks and the Communists – in addition to the two governing parties – the Democrats and the Free Homeland – and independent candidates participated in the election for 33-seat National Assembly. And no opposition parties were denied registration or otherwise kept from the vote.
Prior to the vote, the unrecognized Nagorno Karabakh Republic adopted certain democratic improvements to its Electoral Code. Threshold for the entry of political parties into parliament was lowered from 10 to 6 percent, and for political blocs – from 15 to 8 percent, thus increasing chances for relatively small political entities to effectively contest general elections.
In the end results were mixed for both the governing parties and the opposition: Democrats lost seats, and Free Homeland and Dashnaks gained.
Moreover, report of the Independent American-Dutch Monitoring Delegation, published after the observation mission on Karabakh Parliament elections of May 2010, said that they were held in a “free, fair and transparent” manner, in line with national legislation and the international standards of democracy. The report also noted that “Nagorno Karabakh continues to make strong progress in establishing and sustaining a healthy and sustainable democracy”.
Was FH not aware of this assessment and if not whose assessment has FH considered?
It true that there is not the sort of acrimonious domestic political debate in Karabakh as one often hears in Armenia or Georgia or elsewhere in the former Soviet space.
But how does that signify democratic decline?
FH’s assessment is divorced from reality of Nagorno Karabakh.
The organization’s credibility as an independent democracy and human rights monitor in the world is on the line. I hope they will soon correct themselves.
The Armenian Reporter