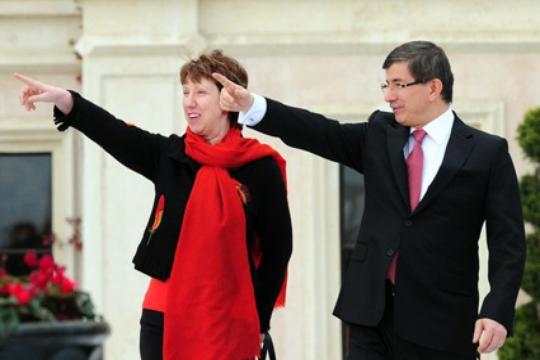 US says working together with Turkey for same goal on Iran

Reflecting the US administration’s stance recently voiced by US President Barack Obama on the same issue, a senior US official has stated that NATO allies Washington and Ankara have been working for the same goal regarding Iran’s nuclear program despite differences in the past.
Iran will either become further isolated or will fulfill its international obligations in line with the international community’s demands, Michael Hammer, the spokesperson for the National Security Council (NSC), said on Wednesday in New York, while recalling that the next round of nuclear talks between world powers and Iran will take place in İstanbul in the second half of January, reports Today’s Zaman.
The US thanks and extremely appreciates Turkey for its willingness for hosting this meeting, Hammer first noted when asked about US expectations of the meeting and how he considered relations with Turkey in regards to the Iran issue at a press conference held at the Foreign Press Center at the US permanent representation to the UN.
“We have a very close alliance relationship with NATO ally Turkey. We want to continue expanding and improving our strategic partnership with Turkey,” Hammer was quoted as saying by the Anatolia news agency, as he highlighted that President Obama has good relations with both Turkish President Abdullah Gül and Prime Minister Recep Tayyip Erdoğan. In the past, Turkey and the US had some differences over the issue of Iran’s nuclear program, and Turkey’s vote against UN Security Council sanctions against Iran last June led to disappointment by the US side, he said.
“However, we went beyond this and now we are working together for the same goal. What is clear and needs not to be forgotten is the fact that both the US and Turkey and the other members of the international community have the same goal, and that is exerting firm efforts to prevent Iran from possessing nuclear weapon and provide Iran’s abiding by its international responsibilities,” Hammer, nevertheless, added.
Meanwhile, the European Union’s foreign policy chief, Catherine Ashton arrived in İstanbul on Thursday for talks with Turkish Foreign Minister Ahmet Davutoğlu. Ashton will lead the nuclear negotiations in İstanbul, which follow December’s negotiations in Geneva, on behalf of the P5+1 nations, the UN Security Council permanent members China, France, Russia, Britain and the United States, plus Germany.
In a December interview with Turkish media, Obama had clearly sought to downplay Turkey’s reluctance to back a tougher line on Iran. “As with our other close allies and friends, we will sometimes disagree, as was the case on the vote on Iran sanctions in the UN Security Council. Our differences about tactics notwithstanding, I firmly believe Turkey shares the goal of preventing a nuclear-armed Iran,” Obama said at the time.
In New York, Hammer reiterated that he believed the US has had very good relations with Turkey. “We look forward to seeing in İstanbul at meeting where Iran is ready this time. We left the door open to diplomacy and while sanctions continue putting pressure on Iran, we hope that Iran will make the right choice by diplomatically approaching this issue in a constructive way,” he said.
Earlier at the conference, Hammer also noted that the US attaches importance to its relations with rising powers such as Turkey, Brazil and Mexico and wants stronger and deeper relations with these countries. The US is currently doing this with Turkey, he added.