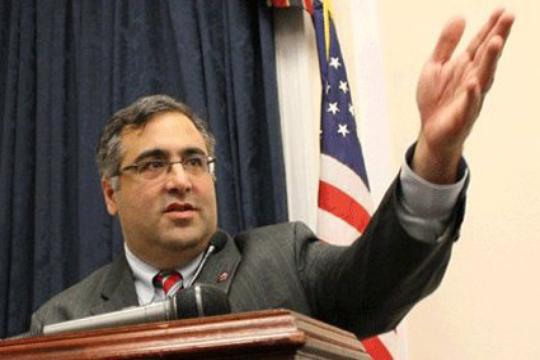 Our expectation is that the Safarov Scandal will trigger a fundamental review and reform of U.S. policy toward Azerbaijan. Aram Hamparian

“1in.am news & Analyses” conducted an interview with the ANCA Executive Director Aram Hamparian, who talked about Assistant Secretary of State for European and Eurasian Affairs Philip Gordon’s official statement on “Safarov case” and future developments of the situation.

Philip Gordon recently announced that America is not satisfied with Hungary’s and Azerbaijani explanations on Ramil Safarov extradition and pardon. He also stated that Washington is disappointed by Azerbaijani and Hungarian steps. What do you think, how will US act after this official statement? What impact can Washington’s disappointment have on the future developments of the issue?

Our expectation is that the Safarov Scandal – representing, as it does, a dangerous escalation of Baku’s longstanding policy of threats, incitement, and aggression – will trigger a fundamental review and reform of U.S. policy toward Azerbaijan and also on the settlement of the Artsakh issue.

In terms of Azerbaijan, U.S. policy-makers should substantially downgrade bilateral ties – including limiting visits, ending military aid and arms sales, and materially curtailing diplomatic support – until Aliyev fully makes amends for this outrage, ends his threats and acts of violence, and publicly commits to a solely peaceful resolution of conflicts with its neighbors, Armenia and Nagorno Karabakh.

With regard to Artsakh, this scandal should mark a decisive shift of U.S. policy toward a new model of mediation, aimed at establishing the terms of Azerbaijan’s recognition of the Nagorno Karabakh Republic’s independence, and the creation of durable security structures to protect the citizens of both Artsakh and Armenia against renewed Azerbaijani aggression.

What explanation does America expect from Hungary and Azerbaijan? What answer would satisfy the US?

The U.S. Department of State would, of course, be best positioned to explain its own expectations.

For our part, we would like to see Hungary apologize for its actions and demand the return of Safarov to complete his full sentence in their prison system.

Azerbaijan, for its part, should return Safarov to Hungary, revoke his promotion, collect his back-pay, and renounce all statements praising him as a hero. More broadly, Baku should end its threats and acts of violence, and commit to a solely peaceful resolution of conflicts with its neighbors, Armenia and Nagorno Karabakh.

What do Armenian lobbyist organizations plan concerning this issue in this phase? Are more intense actions possible after Gordon’s official statement?