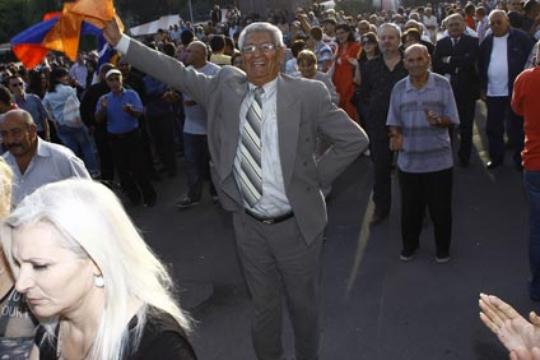 In between emigration and suicide

While in Armenia people try to concentrate between the social active and political fictive on the layer of boycott or the dilemma of participation, the Armenian society continues to suffer with their life. And that life is actually a torture. The proof of it is the high level of emigration and suicide.

The fact that the percentage of emigration or suicide doesn’t change, doesn’t mean that everything is perfect and the situation is not next to tragic. The active and the fictive which try to find solution to this dilemma obviously don’t think of this because if they did, they would know they would better go and talk to those people who try to find the solution between emigration and suicide. They should go, sit and discuss, as those people would be better telling those active and fictive what should be done. Or at least they would say they have no expectation from them so as not to waste energy and try to find solution in between boycott or the issue or participation. The active and fictive should also be thinking about emigration and suicide.

I am not trying to present everything even worse than it is. Anyway it is the time for the tragic-comedy that is going on in Armenia for over 20 years, to come to an end. But it should not come to an end with the emigration or suicide. If there is one person, who should commit suicide or leave, it the social-political thinking that brought Armenia to the current situation. And thus if there is the issue of leaving, the fraud should leave first. The fraud should commit suicide not, the citizen.

That’s the problem in Armenia now. And the persons who are in the process of creating the fraud know that themselves. That’s why they are discussing so called “political dilemmas” to persuade themselves and the society. If they go and talk to the representatives of the society, everything will be over for them. The play will be over. It will be clear for them they have no audience in the theatre. The audience left long time ago and will never come back.