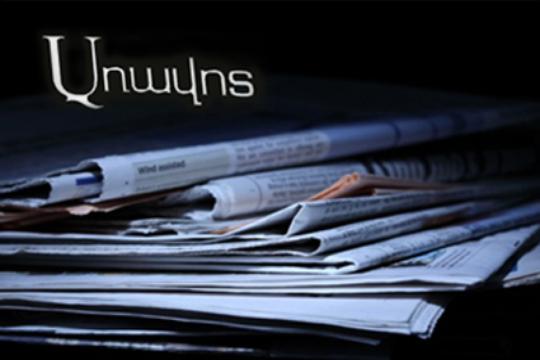 Bagratyan has ample ground to put his candidacy

“Aravot” reports no matter what is said about Levon Zurabyan about destructing the ANC for the political power it is not true. Also Pashinyan and what he is blamed for has nothing to do with the weakening of the ANC. “Aravot” also writes it is Armenia’s luck the first president of the third Republic of Armenia was Levon Ter-Petrosyan and not a communist or a an adventurous dissident and it was Ter-Petrosyan’s presidency when the part of Armenia was liberated.

Now there is a discussion on Bagratyan putting his candidacy on the upcoming presidential elections. “Aravot” states now the criticizing on both sides will be spread. Governmental criticizing will be bringing on to the surface the misdeeds during his prime minister position in Armenia. The opposition will criticize Bagratyan for daring to put his candidacy when Ter-Petrosyan is still there.
“Aravot” states despite Bagratyan’s critics he is an excellent economist and has a political ideology which is a rather rare thing in our times.
“Aravot” concludes there is no need to dig up and confuse everything in the ANC to raise one’s own prestige. Having a joint candidate is a myth but having a respect is quite real.