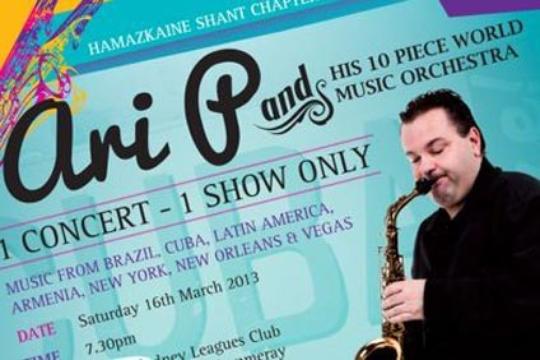 Ari Palandjian and World Music Orchestra to perform in Sydney

HSC issued a statement which says, “Ari has been a supporter of HSC for quite some time, we first saw him on our stage at the Inaugural Armenian Community Performing Arts Awards in 2010 where he wowed audience and brought the house down with his mellow renditions of the well recognised Manuel Menengichian tunes.”“Our relationship has been ongoing and we are now very proud to produce his first show for the Armenian Community and launch his inaugural album ‘The Flower’.”

The album launch concert scheduled on March 16 will feature a host of singers and bandleaders who have been working with Palandjian over the decades. According to the report, these include Lilian Ohanessian, who is a young and accomplished up and coming Jazz Singer and features in the local Armenian band “Blackbird”. Christian Guerrero from Chile, an all in one Latin entertainer with his own Big Band Orchestra, a truly experienced entertainer with amazing versatility to cover audiences from a huge variety of cultural backgrounds. Adem Ozbakan, with Australian-Bosnian heritage, who features in Palandjian’s High Rollers Big Band, is your ultimate Crooner and Swooner – he has performed in various venues around Sydney including The Basement to the Sydney Convention Centre and internationally to perform for various corporate events. Also included in the band from Japan, Junici Shiomi on Bass, on drums the amazing Steve Manovski and on piano, Misha Teterin from Russia, Richard Calabro from Italy plus a host of other musicians from all over the world.

Armenia.com also reports that Palandjian was born in Australia but grew up in Sydney. After graduating from the university he started working and playing in various Latin American ensembles and Salsa Bands right across Australia and internationally, until he established his own big band, the High Rollers Big Band, which still operates today.