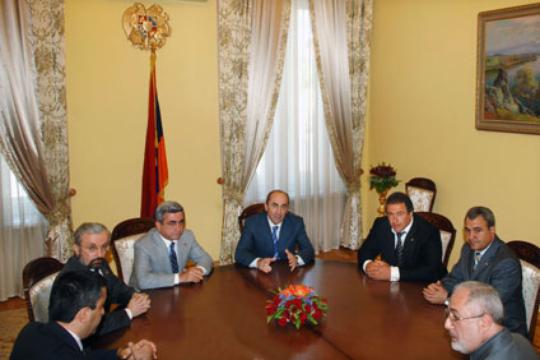 Fight for the PAP

Speaking about the presidential election process, Robert Kocharian in the interview with “Mediamax” pointed out the fact of turning political compromise into petty trade as a reason for not running.
Reporter of “First News and Analyses” Yeghiazar Ayntaptsi writes that this observation is particularly interesting in the context of that political power, the growth of which was appraised by the second President for several times in the past, obviously welcoming “Prosperous Armenia” party’s successful ratings.
While now Robert Kocharian has not said anything about “Prosperous Armenia”, has not tried to reflect the PAP’s position in any way, which is perceived by the public and political circles, to say the least, not ambiguous.
Robert Kocharyan is not even trying to encourage the PAP and to express support for its decision, just simply betrays the party to carelessness and demonstrably ignores.
The reporter notes that here, apparently, there is his discontent about Gagik Tsarukyan’s decision, and the second President likely wants to express dissatisfaction with this, because he does not even mention the PAP’s or Tsarukyan’s factor in the context of internal political competition.
“Kocharian is either trying not to open his cards ahead of time and provoke Serzh Sargsyan, driving PAP to make the final blow, or the second President would like to emphasize that Tsarukyan no longer posess a key role in his political plans. However, from this point of view, of course, it is interesting whether it refers only Tsarukyan, or the PAP as a party.”concludes the reporter.