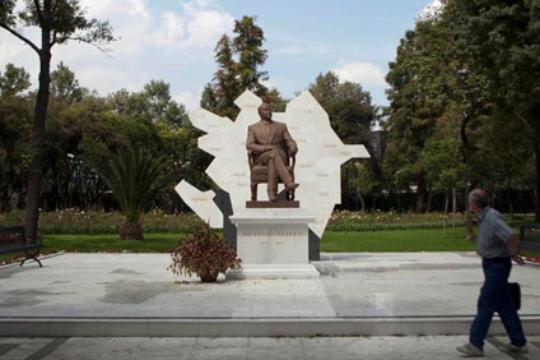 Asbarez reports that Mexico’s Federal Administrative Court dismissed a complaint filed by Azerbaijan’s Embassy to prevent city authorities to dismantle and remove a statue of Azeri dictator Haydar Aliyev from a park at the center of the city, reported the Cronica newspaper.

According to the court’s decision. The removal of the statue is underway.
Should be recalled, the statue was erected over the summer, after the Azeri government invested a reported $10 million in renovation of the park and the statue. The giant statue had raised concerns with citizens and protests from activists who decried the city’s decision to house a statue of a known dictator along such figures as Abraham Lincoln and Mahatma Gandhi.

In late November, a three-person panel appointed to investigate the erection of the statue in the city’s Reforma Boulevard recommended that the statue be removed, prompting Azerbaijan’s Ambassador to Mexico Ilgar Mukhtarov to threaten retaliation against the Mexican government, including the closure of Baku’s representation in Mexico.

As Asbarez’ report continues, the Azerbaijani Embassy appealed the commission decision to the district court requesting an injunction to stay the decision to remove the statue.
In November, Muktarov also said Azerbaijan would cancel $4 billion in investment projects for Mexico, saying if the then Mexico City Mayor Marcelo Ebrard “decides to remove the monument, we will cancel the projects, close the embassy, it would hurt the relationship between the two countries, and it would not be good for his image to be the person who prevented a $4-billion investment.”