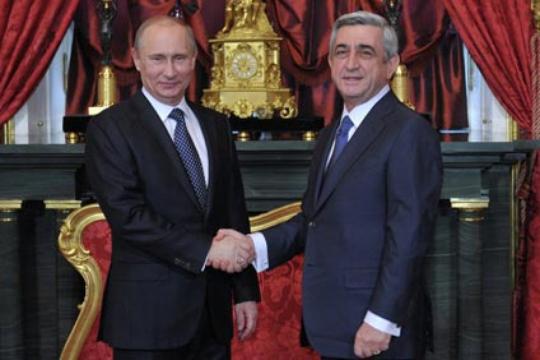 Eurasian sword over the head of autocracy

The reporter of “First News and Analyses” Hovhan Mandakuni notes the fact that Armenia’s presidential elections have nothing to do with the problems the state and the society are facing, especially the vital challenges requiring urgent solutions. One of the most vivid examples of the fact is that Armenia’s political agenda almost fails to have the Customs Union or the so-called problem of the Eurasian economic prospects that Russia is trying to impose on Armenia. At the same time, the European Union repeated several times in the recent weeks, that if we go to the Customs Union, we should forget about deep free trade agreement with the European Union.

This testifies the fact that the EU considers the situation very serious. But the state figures of the official Yerevan note that for Armenia the European Union and the Eurasian Union do not contradict each other, which, of course, is a demagogy.
The latest developments showed that the triplet PAP – ARF – ANC also doesn’t hold out any hope, the main approaches of which displayed Russia’s interests in Armenia. Thus, Russia is able to control Serzh Sargsyan’s efforts to deepen relations with the West. Currently, a situation is created, where the so-called Russian opposition is neutralized, contracted and is facing a difficult situation to overcome many problems. But now Armenia’s interest here demands the EU, because there are economic opportunities, which will enable to develop and integrate Armenia into the civilized world, at least in the perspective of modern technology.

The reporter notes that there are, of course, certain powers which are clearly against these perspectives: the ANC breakaway political units, individuals from “Heritage” party, but their collective potential is very weak.

From all the above mentioned Hovhan Mandakuni conlcudes that Russian influence in Armenia both in the fields of the government and the opposition is preserved, which, convening to the economic impact, displays a picture of a dangerous prospect of irrecoverable loss of sovereignty.