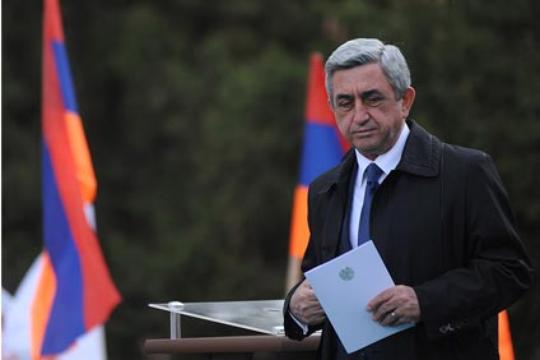 How to make the situation serious?

There are 8 candidates left to compete in the forthcoming presidential elections of RA. This means that only those 8 people are able to pay the 8 million dram electoral mortgage which is needed to run for president.

A lot has already been said about the candidates and their seriousness, but at the same time when it was clear that 8 people are going to compete to be a president, one of the candidates, Andrias Ghukasyan, announced that he is going to urge all the candidates withdraw and leave Serzh Sargsyan alone. He is going to make the suggestion today and wait for the answer till January 15. Ghukasyan’s argument is that whoever doesn’t agree with his suggestions, is a fake candidate.

The editor-in-chief of “Zhamanak” daily newspaper Arman Babajanyan in his analyses focuses on this suggestion and notes, according to him, most likely none of the candidates will accept Ghukasyan’s suggestions. But as Babajanyan indicates there is a factor of irrationality in all this.

Babajanyan states, the social opinion towards Sargsyan is based on other factors which have nothing to do with this presidential process. This whole question about leaving the incumbent alone or not alone, makes the situation not serious. This shouldn’t really bother the president, because he himself with several oppositional figures created a political field in the country which is absolutely not close to seriousness.

But the problem here is different, as Babajanyan, notes. The problem is in presenting serious suggestions to the society. The suggestions don’t have to be revolutionary, but they need to be serious, persuasive. This should be the problem of those politicians who expect to have an active role in the organization of civil society. “Finally, today’s situation can be defined by “not seriousness” and it is a must to make it serious with what, how and with who.”

Babajanyan concludes saying, “This is the problem and this is on the society’s agenda.”