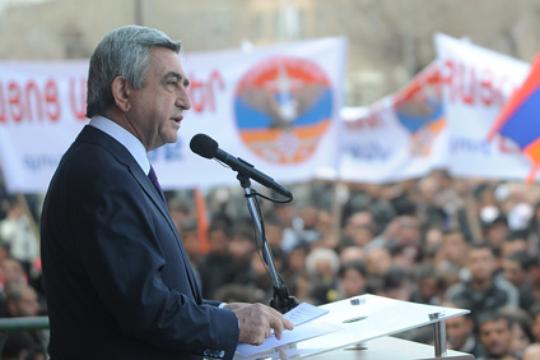 As the analyst of “First News and Analyses,” Yeghiazar Ayntaptsi reports, Aharon Adibekyan, who can be considered as one, who avoids to express the political intentions of the government arithmetically, announced that the results of the survey showed that 73% of the citizens are going to vote for Serzh Sargsyan.

Now if we consider this as the non official reproduction of the government’s intentions, then it turns out that Sargsyan is planning to start with 73 percent.
So the reporter says that the starting price of the bidding for Sargsyan will be 73. Depending on the situation, this percentage can both decrease and increase. It is needless to mention that if this happens, it will simply be a shame for Armenia.

This will mean that for the world Armenia will be known not as a post soviet country, that is putting new roads for the development of the political, economic and cultural growth, but a country striving back for the elections.

According to the reporter, this 73 percent is the final point, the peak of the precipice, from which Armenia will either step aside or fall into the abyss completely. But the society also has to be very responsive to the evens not ta face quite severe and irreversible results.