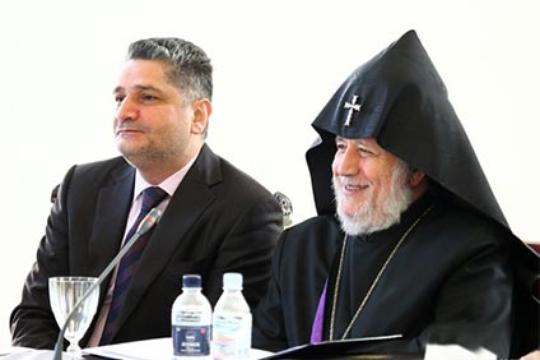 Criminal contract of the Memorial day

The analyst of the “First News and Analyses,” Yeghiazar Ayntaptsi wrote an article about the Memorial day, which is vigorously being discussed in the social networks, as being announced as an official day-off. This step was taken by Tigran Sargsyan, after he took the post of the vice-president. However, it is obvious, that he wouldn’t do that without Serzh Sargsyan’s approval.

As mentioned by the reporter, the people who run the post of the president or the vice-president usually try to show their being devotional, thus they attend different clerical events, as well as different representatives of clergy, attend their events. The religion, or it is better to say, the church has become one of the active parts of Armenian authorities’ policy.
“We don’t want to suspect the belief of any of the officials, however, some of their actions oppose to their devotional images.” writes Yeghiazar Ayntaptsi.

The reporter is surprised about the paradox, that people go to church, participate in the liturgy, and then go to one of the pre-electoral rallies and call the people to vote for this or that oligarch. It is hard to understand, nevertheless, one thing is obvious, that as a result of all this, the prestige of the clergy goes down.
This is a really serious problem, and the fact of Memorial days being working or non-working days are just derivative, which is a consequence of a more profound and large-scale phenomenon.