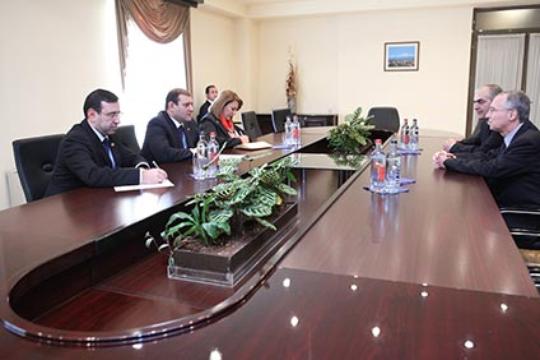 Taron Margaryan meets the Ambassador of Greece to Armenia

Yerevan Mayor Taron Margaryan met with newly appointed Ambassador of Greece to Armenia Ioannis Taghis.
Welcoming the Ambassador, Margaryan congratulated him on his new appointment and expressed hope that friendly and partner relations between the Armenian and Greek cities will develop to a new level.
“The City Hall is always open and willing to discuss any proposal for cooperation that will contribute to the development of partnership relations between the two cities,” said Taron Margaryan.
The Ambassador thanked for the warm reception and noted that historical past and great friendship of two nations is a good basis and an opportunity for seeking new directions for cooperation and bilateral development. The sides discussed various issues of mutual interest.