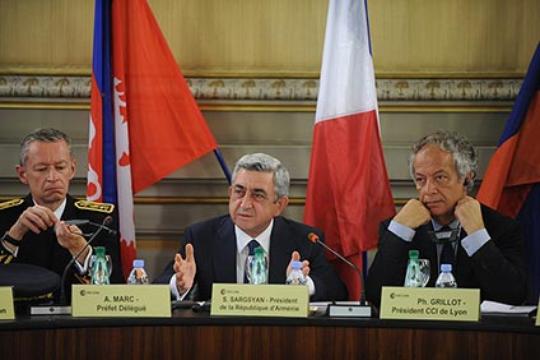 What is Serzh Sargsyan preparing for?

Serzh Sargsyan recently received the Vice-Chairpersons of the “National Congress of Western Armenians” international non-governmental organization. Note that the company is engaged in the protection of the rights of heirs of the Genocide victims and is registered in the United Nations Economic and Social Council.

Reporter of “First News and Analyses” Eghiazar Ayntaptsi notes in his political analyses that the period of this meeting is very interesting, which is a few days before the start of the presidential election campaign.
“Serzh Sargsyan is delivering a specific review of claims, indicating a certain shade of foreign policy after being re-elected, which isn’t surprising, as the 100th anniversary of the Genocide is approaching and we should be stricter with our demands. Apparently, Serzh Sargsyan is trying to receive special gestures from Turkey, to get post-election agreement, which may be needed this time to distract the public’s attention. So the Turkish trend might be needed in case of inaction of internal reforms. Serzh Sargsyan, of course, will not be against their implementation, because it is beneficial in all respects, but there is a problem, oligarchy and opposition.” writes the reporter.

Aytaptsi also notes that Turkey will not be the only viable option for Serzh Sargsyan, and he will try to arrange other options, but in all cases he keeps ready the option of Turkey, using rougher tone and waiting for Ankara’s response.
On the other hand, the reporter notes that the activation of emphasizing demands may itself be one of the distracting instruments, a way of national pseudo-consolidation that the President may use to conceal the inefficiency of internal reforms.