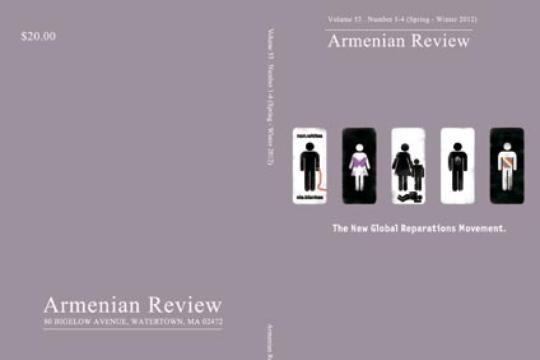 The Armenian Weekly reports the Armenian Review recently announced the publication of a special issue about “The New Global Reparations Movement,” the growing movement to require reparations for cases of mass human rights violation.

Professor Henry Theriault of Worcester State University is the guest editor of the special issue, and also contributes his analysis of the moral imperative requiring reparations for the Armenian Genocide. International law expert Dr. Alfred de Zayas argues the case that the UN Genocide Convention is both applicable to the Armenian Genocide and requires that reparations be made.

For many years, reparations had not been a central element in political, legal, or ethical engagements with past group harms. Since the 1988 decision by the United States to compensate Japanese-Americans interned during World War II, however, reparations have been raised by victim groups as a key requirement for justice and have become intertwined with truth and reconciliation processes.
Thus the articles in the special issue present many of the other key reparations movements. Jermaine McCalpin and M.P. Giyose discuss the Truth and Reconciliation Commission in South Africa and connect it to other cases:

McCalpin to African-American and Native American reparations, and Giyose to the legacy of former colonies burdened by the huge state debts incurred by their former rulers. Patrick Sargent analyzes South Africa, Indonesia, Pakistan, and Haiti as four cases of such “odious debt.” Kibibi Tyehimba analyzes the need for reparations for the historical legacy of sustained violence against African-Americans, and Haruko Shibasaki presents the legal movement in Japan for reparations for the “Comfort Women” who were forced into sexual slavery by the Japanese Army during World War II. A group of authors present the issue of reparations for indigenous peoples who were dispossessed by Argentina’s military during the country’s “Campaign to the Desert” in the 19th century.