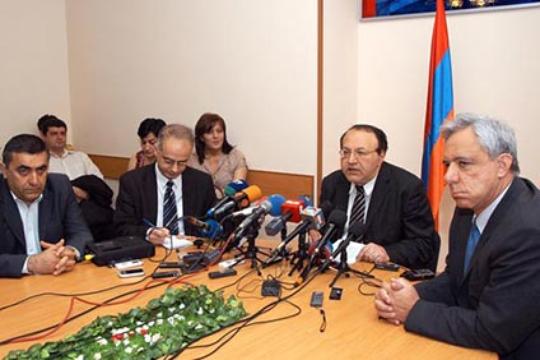 “Russian roulette” of the “Triple”

According to the reporter of “First News and Analyses” Hovhan Mandakuni, ANC actually left Hrant Bagratyan all alone, as a “punishment” for making a decision “independently” without Levon Ter-Petrosyan. And this is the style of the Congress: to reject everything, which is not initiated by Ter-Petrosyan.
However, the support of the Congress couldn’t be a big help for Bagratyan to compete in the elections. And it is more interesting that ANC, Prosperous Party of Armenia and ARF make entirely the same decisions.
A question arises, what are these parties, who denied their participation in the elections, going to do? Nevertheless, if they didn’t manage to do anything before the elections, that means after the elections they will hardly be able to do anything either and it’s not even possible for them to have an agreement on this.

The reporter also notes that the above mentioned parties have unification of profits that is to do everything which will make the refusal of the participation in the elections look like a result of wise calculations, instead of lack of the power or money.

On the other hand, there is also the problem of the government’s response. As the parties might be thinking of Sargsyan’s reaction to be worried about the strategy that they have and would start putting efforts to break the “triple” and make compromises with one of the parties, whom he will “trust” more.
So, in fact, there is probably a unique “Russian roulette” among the powers of those three parties. And this approach looks more like a lack of power on some certain strategy.