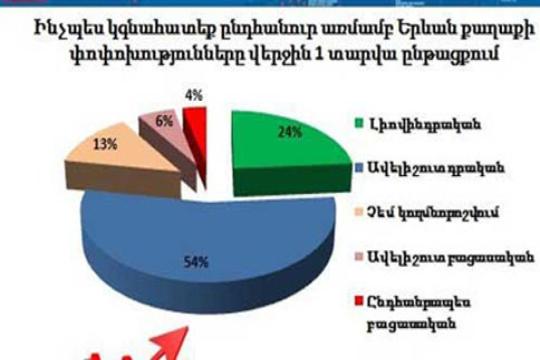 Citizens of Yerevan asses the positive changes in the city

Armenian representation of Gallup International Association and Armenian Marketing Association published the results of the research called “Citizens of Yerevan about Yerevan”.

A presentation was held to show the results of the survey which was organized by Vice-mayor of Yerevan city Kamo Areyan.
78 % of the questioned citizens said that they see positive changes in Yerevan, 24 % think vise verse.

According to Areyan, the questions were very interesting and it totally helped them to understand what they should do in the future.
Areyan noted that from the answers they understood that citizens are mostly concerned with social problems, unemployment, inflation, etc.
The first place in the positive changes organized by Yerevan city hall is the increase of green areas.