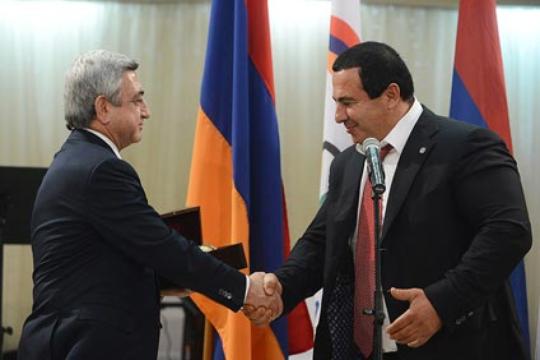 Musa Mikayelyan in his political analysis states yesterday in “Ojakh” restaurant where the “elite” of the country usually visits the ceremony of awarding the sportsmen took place under the auspices of Gagik Tsarukyan. Usually the incumbent president participates in such ceremonies. Last year Tsarukyan awarded Serzh Sargsyan and Robert Kocharyan with similar golden lions.

Yesterday’s main intrigue was whether Kocharyan would participate in the ceremony where he would face the incumbent president. This intrigue has a political face, as a matter of fact.

According to Mikayelyan Kocharyan in case visiting the ceremony would state the fact of predominance of the president. On the other hand, as Mikayelyan goes on, this could be nothing because in 2007 Kocharyan already did such thing visiting Sargsyan at the RP office to congratulate the latter on the victory in the parliamentary elections.
Mikayelyan concludes Kocharyan thus could accept Sargsyan’s victory but only coming out of strategic considerations. After October 27 Kocharyan restated how he could be a sole monitor in the political processes. Besides, as Mikayelyan says, Kocharyan’s appearance could hint on the boycotting the presidential elections joining his favorite PAP.

Rejecting Tsarukyan’s invitation could also be against Tsarukyan himself, not Sargsyan particularly, Mikayelyan says.