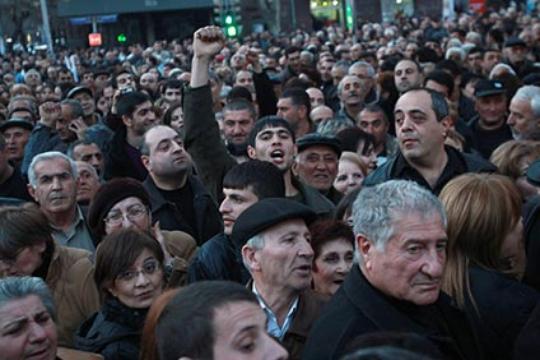 Away from deceit, towards a misty perspective

Aram Amatuni in his political analysis states the upcoming presidential elections will obviously lack alternative and this became even clearer after Ter-Petrosyan withdrew his candidacy.

Even if those who said to be presenting an alternative power were nominated as candidates, the change would be only formal and not cardinal. Such change happened in 1988 when the people changed, the structure remained the same, Amatuni says. Both Tsarukyan and Vardan Oskanyan would be formal alternatives for the incumbent government and Ter-Petrosyan was no different in its superficiality as a matter of fact. He showed that the opposition was being run with the same principles, hierarchy as the government was running. In this situation hoping for an alternative change in the system would be a deceit.
The lack of the alternative powers in the political system of the country come to state that the elections will not be a deceit, since they will be elected having no equal competitive power in the opposition. This will be a good motivation for the public to think over the situation which would eventually conclude to the formation of a true alternative and opposition.

Amatuni states this situation is a win situation for the public since the latter will be exempt of the political manipulations so typical of the political elites in the country. How the public will react and act in this situation is another issue taking into account the fact that the civic responsibility among the people rose recently.
Amatuni believes this time span is a good means for the public to rethink how to reorganize and come to a concrete alternative.