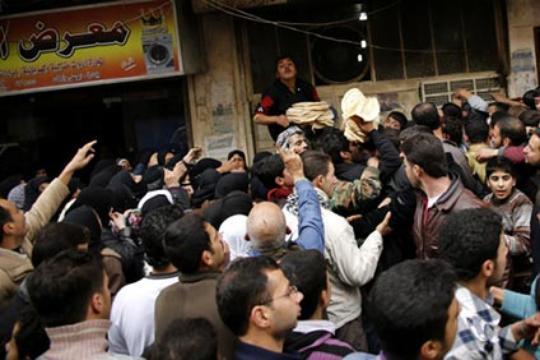 FP published Steven Sotloff’s recent article on developments in Syria and the situation the civilians of the country are.

Jamila Hijali initially shied away when I approached her in one of the many lines outside Aleppo’s bread factories and bakeries. But after a moment she motioned me over to vent her frustrations. “We are tired of the revolution because before women never stood in line for bread like this,” the 39-year-old widow with six children complained. “But now it is my primary occupation in life. Bread line. Sleep. Bread line. Sleep.”

The 21-month long Syrian revolution is taking its toll on residents of the country’s largest city. With everything from medicine to firewood in scarce supply, and with winter bringing temperatures down to near freezing, people here are struggling to cope with a war they just hope will end. But with fighting on urban fronts deadlocked, they admit their wishes are unlikely to be filled any time soon. Instead, the civilians of Aleppo are trapped in a violent stalemate, left to endure a war whose suffering and hardships grow larger with every passing day. Though NATO Secretary-General Anders Fogh Rasmussen recently boasted “it’s only a question of time” before the Syrian regime of Bashar al-Assad collapses, people in Aleppo fear they are stage players in a war with no end in sight.
At the Military Bread Factory, once owned and run by the government, Muhi al-Din Saka, 37, is busy overseeing the conveyor line as a dozen pita loaves trickle over the belt and fall into a large receptacle. Ever since fighting in Aleppo broke out in July, the factory’s manager of operations spends almost all his time at the plant, mostly to troubleshoot problems.

Chief among them is the slowdown in bread production. The factory has two machines that can produce about 20 tons of bread a day. But a shortage in filtered diesel has forced the plant to rely on poorer quality diesel to fuel the machines, which results in one machine shutting down every day as built-up sediment clogs the pipes. “It’s a hassle to start and stop all the time,” says Saka.
Before the revolution, the factory sold a kilogram of bread for nine Syrian pounds, roughly 20 cents. Today that same kilogram costs 15 pounds. But while the cost of bread has increased by 67 percent, it has lagged far behind the cost of fuel — which has skyrocketed from seven pounds a liter to 180 pounds. To keep bread affordable, the Free Syrian Army (FSA) rebels have covered the shortfall, essentially replacing the government as the subsidizer of the basic staple in Syrians’ diet.
Outside the factory, civilians are less concerned with the economics of bread production and more focused on why they have to wait for up to seven hours for a three-kilogram bag of pita loaves. “Why do we have to stand here for almost half the day?” asks Faras Sido, 33, as squirts of rain pelt his beige jacket. “Haven’t they learned how to make bread after all these years?”
Though they have tried to make the best of a distribution system they are ill-equipped to deal with, the FSA is still blamed for its failures. “I am here to protect these people,” says Muhammad Nasr, a fighter from Mara, a small town some 20 miles east of Aleppo. “But when the machines shut down, they accuse us of stealing the bread.”

At 10:45 p.m., FSA fighters begin handing out numbers — much like at a Brooklyn deli — to the 700 or so people waiting in line. An hour later, a small window opens and the slow process of bread distribution begins. Around dawn, the lines thin out as the people disappear to their houses with their bag of precious pita.
At the Military Bread Factory, the process functions fairly smoothly. But at the hundreds of bakeries throughout the city where bread is still made by hand, the lines are anything but calm. People shove and jockey for better position as FSA fighters argue with customers. A fighter occasionally fires a shot to call the crowd to order, but no one pays attention. “We are people not cattle,” notes Firas Bibsi, 48, as he watches the jostling from his makeshift fruit stand in the neighborhood of Fardus. “But this war is slowly killing our humanity without a shot ever being fired at us.”

Increasingly, however, shots are fired at customers. The regime has frequently bombed crowded bread lines staffed by rebels because they are easy targets — even for the most inexperienced fighter pilots. On Sunday, Dec. 23, dozens of civilians were killed when a fighter jet made several bombing runs over a bread line in the city of Halfaya, in the central province of Hama.
And war has brought more pedestrians concerns as well; it is not just the cost of bread that has skyrocketed. The price of everything from cooking gas to meat has doubled — and in some cases even quadrupled — since the regime withdrew from Aleppo when fighting broke out in July, taking its robust state subsidy system along with it. Though regime forces quickly ceded the eastern part of the city, they hunkered down in western sectors and clung to intelligence headquarters and military bases in the northern areas. Today, the balance of forces has changed little. Though some neighborhoods, such as Karam al-Jabl, have been destroyed, most quarters bear the scars of war from fierce fighting or random shelling.
Though patient residents eventually get their bag of bread, many are not as lucky when it comes to other necessities, including the medicine they need to treat common ailments. At a makeshift clinic in the neighborhood of Bustan al-Qasr, Dr. Faysal Habun is examining an infant diagnosed with whooping cough. The disease is usually curable with simple antibiotics, but the fighting has disrupted the routine delivery of basic medical supplies. And since the regime bombed the Dar al-Shifa hospital in November, physicians have had a particularly hard time providing care for their patients. “We just don’t have the communications and means we had before,” Habun says. Syrian aid groups have cropped up to provide the needed supplies, but none of the major international aid groups operating in the country has entered rebel-held areas. The result is that volunteers with no experience are desperately scrambling to solve a crisis they are in no way prepared to handle.
Muhammad Jadu wishes time could move backward. The electrician does not understand what the rebels are fighting for, nor does he care. He merely knows the war has dealt a death blow to his business; the city has not had electricity for several weeks. Today, Jadu spends his time at a friend’s wheel and rim shop, drinking tea and smoking an endless string of cigarettes. “This war has made everything worse and nothing better,” Jadu laments. “Why do we need it? We have enough problems in Syria.”
In the poor neighborhood of Sukari, where buildings stack up on one another, Bakari Kajaji is performing his nightly prayers. The flickers of an oil lamp provide just enough light to illuminate his red prayer rug. Near the bed along the other side of the wall, auburn embers in a small barbecue grill supply a consistent stream of heat that keeps Kajaji and his wife from shivering. With no power and heat, the 58-year-old spends most of his day in the dark, mumbling to his wife about topics ranging from the wet staircase to his desire to buy a new transistor radio. Though he has not worked at his laundromat for two months — one of his bosses was killed by shelling and the other fled to Egypt — and his savings are almost exhausted, Kajaji is not complaining. “It is better to starve a thousand days with no electricity and heat than to endure one more day of Assad. We have everything we need.”
It is rare to find residents who share Kajaji’s dogged faith. While many support the rebel fighters, they are nevertheless quick to share their tales of hardships. The trauma of war has scarred them.

At a cemetery in the northeastern neighborhood of al-Halooq, Ahmad Jani, 31, is burying his younger brother, Hamdi, who died when a shell landed on the street he was scurrying across. Whether it was an errant shell targeting fighters in nearby Bustan al-Pasha, along the front lines, or merely another of the regime’s indiscriminant bombings in civilian neighborhoods is of little concern to Jani. Though fighting rages daily less than a mile away, his family is too poor to flee for safer havens. The clan operates a small supermarket that carries consumer products ranging from soap to sponges. Shuttering its doors would mean drying up the family’s sole source of income.

Most stores have closed in Bustan al-Pasha. The only cars driving through its streets shuttle fighters to empty buildings that have been converted into frontline bunkers. Nearby — often around the corner or even in windows overlooking the rubble — regime soldiers are in position. There is no movement in these vacant streets. The two sides are locked in a chess game in which neither player wants to make the next move.

Hamid Shloni is on this stalemated front line. He’s 27, and once worked in a cement factory; he joined the fighting last spring, when men began mobilizing in his village. Every 20 minutes or so, he pokes his Kalashnikov out the window and lets loose a barrage of bullets. “Need to keep them awake,” he says with a beaming smile that reveals a wide gap between his teeth. “They are not here for a vacation from Damascus.” Fighters sitting on the floor appear not to hear Shloni’s routine wakeup call and the commentary he offers to justify it. Utter boredom, or the cold, has paralyzed these men, who huddle around a cell phone looking at pictures of famous female Arab singers.
Bustan al-Pasha is one of a dozen fronts in Aleppo where fighters spend most of the day doing everything but fighting. They brew tea, forage through houses to find wood for heat, and smokeconstantly. Their battle in the city has largely reached a standstill. The winter cold and the rain that has come with it have them merely looking for the next desk to break down to heat the shelters they call home. In these remote buildings on a quiet front, all the fighters have is time.
They are still confident they will prevail. But the optimism that pushed them to take up arms to oust an oppressive regime has been replaced by a quixotic hope that their perseverance will eventually wear down the government to the point of collapse. “War is not as easy as we first thought,” admits Hilal Bradi, a 24-year-old day-worker. “It seemed so simple when we started fighting. But I never expected it to take this long.”