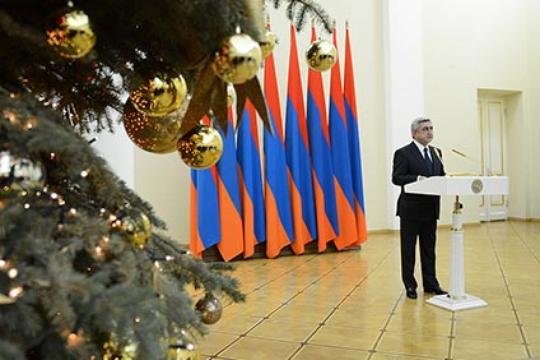 Serzh Sargsyan, get out of the residence, if you are sincere

As reported earlier Serzh Sargsyan organized a reception on the occasion of New Year and Christmas holidays for the businessmen of the country and promised them a fair court, judicial system etc.

Reporter of “First News and Analyses” Hovhan Mandakuni writes that he accepts the importance of business for Armenia, but notes that oligarch isn’t businessman. Businessman in Armenia is the one who has no additional leverage, is struggling alone and does not have any preferential terms within the framework of the law, trying to save his business. And when those people hear about the assurances of the law and a fair judicial system, it seems funny, because while the President is giving promises to a certain layer of the invitees (privileged businessmen) in his residence, inspectors come with a year appetite to squeeze the last penny from real interpreneurs, by blackmailing, intimidation, threatening.

A question arises, whether Serzh Sargsyan knows about this or not. “He knows quite well, that is why he is giving promises of the law and justice. However, he does not imagine well the reality he is talking about to change. Maybe the President does not even want to imagine it, and it is better, because if he fully understands the reality, he will be ashamed to make new speeches.”

The reporter notes in his analyses that instead of such receptions, the head of the country could visit them in person and try to see and understand their problems. At the same time, the question of a small and medium-sized entrepreneur would be more difficult, than the questions of 100 major businessmen.
Mandakuni concludes with a statement, “This is the way of changes, the way they sincerely wish to display. One cannot transfer the country to the festive tables of the presidential residence. One has to get out of those tables, if he wants to bring the country out of the current situation.”