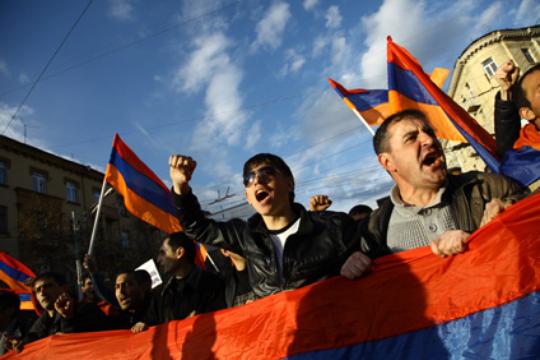 In his political analysis Aram Amatuni concludes the 2012 year from the political aspect. He states the whole 2012 year was a year of a decline, lest dangerous of which was the economic one. Nor was there a civic activism despite a few glimpses throughout the year. The lack of civic activism decreased the political powers’ demotivation to change and on the whole the 201 year was a year of stagnation. Amatuni states neither the opposition nor the incumbent government have nothing to make the people believe a positive shift was recorded.

Amatuni believes both political powers do not completely understand the situation they have created and have dragged the public into and that there is a need to show them the truth. Those who have caused this stagnation do want to be talked less about and not to be discussed. Amatuni says if stagnation is not talked about, then it is less considered as well. No borders and the means to change the situation are searched. Thus the best way to fight the total apathy and stagnation in the country is to realize and deal with it, no matter how naïve the political technology will consider it.
Amatuni mentions it is impossible to inject pessimism into the civic society because the society is a self-satisfied organism and does not need exogeneous factors for stimulation.

Amatuni says the aforementioned statements are true taking into account the 2007-2008 parliamentary elections when the society during a couple of weeks managed to come together and come up with a national movement.
Hence Amatuni concludes nothing stimulates the civic society as the work and being engaged into processes when they feel they are capable to change anything.