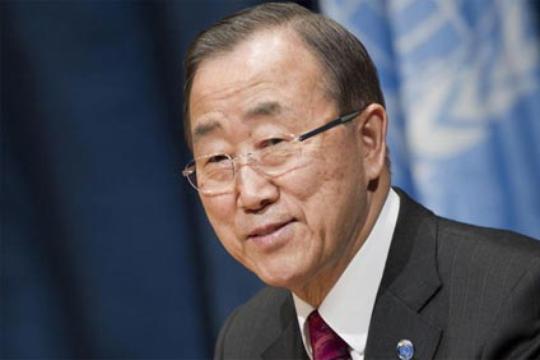 I am a great champion of the power of youth to change the world, but this week I celebrate a 64-year old responsible for ushering in momentous progress. Not a person, but a document that was born in December 1948 and forever altered the view of how we treat members of our human family. The Universal Declaration of Human Rights triggered a fundamental shift in global thinking by affirming that all human beings—not some, not most, but all—are born free and equal in dignity and rights.

The fight to realize the ideals of the Declaration is at the heart of the mission of the United Nations. The international community has built a strong record of combating racism, promoting gender equality, protecting children, and breaking down barriers facing persons with disabilities. We have a long way to go in all of these areas. But we are turning the tide on discrimination in both law and practice.

While some old prejudices have started to dissolve, others remain. Around the world, lesbian, gay, bisexual and transgender (LGBT) people are targeted and assaulted, sometimes killed. Even children and teens are taunted by their peers, beaten and bullied, pushed out of school, disowned by their families, forced into marriage and, in the worst cases, driven to suicide. LGBT people suffer at work, at clinics and hospitals, and in schools – the very places that should protect them. More than 76 countries continue to criminalize homosexuality.

I have spoken out repeatedly against this tragic and unjust discrimination, and I am encouraged by the many positive developments of recent years. There have been far-reaching reforms in Europe, the Americas and a number of Asian and African countries, and extraordinary shifts in social attitudes in many parts of the world. At the United Nations, we have seen a series of historic firsts. Last year, the Human Rights Council adopted the first UN resolution on human rights, sexual orientation and gender identity, expressing “grave concern” at violence and discrimination against LGBT people. The High Commissioner for Human Rights published the first UN report documenting the problem, and the Human Rights Council discussed the findings earlier this year – the first time a UN body held a formal debate on the subject.

Activists have helped to open a door. We cannot let it close now. We must all speak out against homophobia, especially leaders in the public eye.

It is an outrage that so many countries continue to criminalize people simply for loving another human being of the same sex. In some cases, new discriminatory laws are being introduced. In others, these laws are not home-grown; they were inherited from former colonial powers. Laws rooted in the prejudices of the 19th-century are fuelling 21st-century hate. As long as the law treats certain individuals as contemptible, criminal, worthy only of punishment, broader society will have license to do the same.

These laws must go. We need to replace them with laws that provide adequate protection against discrimination, including on the basis of sexual orientation and gender identity. We also need a broad public education effort to help people overcome hate and fear and accept one another for who they are.

When I meet with leaders from around the world I raise my voice for equality for the LGBT members of our human family. Many leaders say they wish they could do more, but they point to public opinion as a barrier to progress. People also cite religious beliefs and cultural sentiments.

I fully respect peoples’ rights to believe – and to follow in their own lives – whatever religious teachings they choose. This, too, is a human right. But there can be no excuse for violence or discrimination, ever.

I understand it can be difficult to stand up to public opinion. But just because a majority might disapprove of certain individuals does not entitle the State to withhold their basic rights. Democracy is more than majority rule. It requires defending vulnerable minorities from hostile majorities. Governments have a duty to challenge prejudice, not yield to it.

We all have a role to play. Desmond Tutu said recently that the tidal wave of change is made of up a million ripples. As we celebrate Human Rights Day this year, let us recommit to realizing the promise of the Universal Declaration of Human Rights for all people – as it was intended.