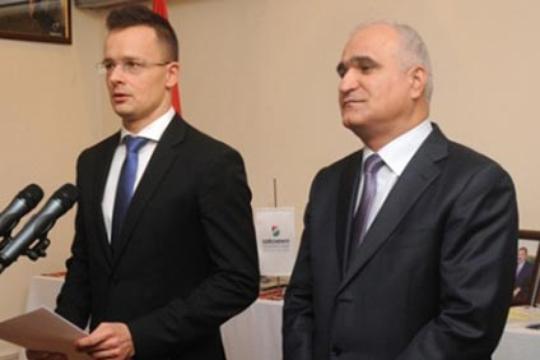 Asbarez writes that three months after extraditing axe-murderer Ramil Safarov to Azerbaijan, where he was pardoned and pronounced a national hero, Hungary opened its first ever trade office in Baku earlier this month in hopes of advancing economic relations with the very government that applauds ethnically motivated murder.

We should recall that Safarov, who was serving a sentence in Budapest for murdering an Armenian officer Gurgen Hayrapetian in 2004 during a NATO Partnership for Peace program, was promoted in the Azeri Army. The White House, Brussels and other international entities condemned the extradition and the subsequent pardon of the axe-murderer.
“The trading house was established in Azerbaijan as the two countries are strategic partners,” said Peter Szijjarto, Hungary’s foreign minister, during the opening ceremony of the office.

He said the first reason of opening the House in Baku is the strategic cooperation between the two countries and the second is compliance of the supply for the Hungarian economy with Azerbaijan’s demand.
A Hungarian delegation headed by Szijjarto, which consisted of economic, banking and tourism sectors’ representatives, took part in an Azerbaijani-Hungarian business forum on the same day.
Azerbaijani Economic Development Minister Shahin Mustafayev told the business forum that political relations between Azerbaijan and Hungary are at a high level and there is potential for their further development, which is confirmed by numerous visits and meetings.