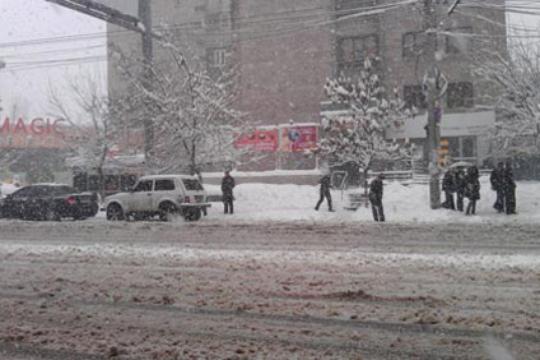 Snow blowing up all the balloons (February 2012)

Political analyst Aram Amatuni states the snow of yesterday depicted the whole governmental structure condition both in political and social life the latter’s impotence to handle issues which eventually cause major crises. Before the snow the municipality of Yerevan was announcing flamboyant and eloquent speeches of their complete readiness to handle the unexpected show falls, their process towards a new way of handling the mechanisms in the country, but as soon as the snow fell, the balloon blew up and everything including their promises went under snow.

Amatuni states the snow very vividly shows the inefficiency of the incumbent government and it is not correct to see the municipality as the sole responsible for the situation. This is a cluster of inefficiencies that does not support the whole chain of promised policies.
Amatuni adds there have been competitions to hand in the recycling and other utility issues to abroad companies. This is another example when the state responsibilities are put on the shoulders of a private sector behind which our state officials will be standing.

Amatuni concludes the result as always is the citizen of Armenia with empty pockets and state officials with growing incomes who so masterly hide themselves behind the back of the so called private sector.