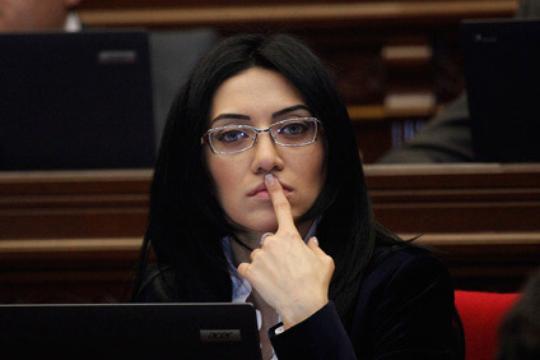 Mademoiselles instead of Oligarchs

Today in the National Assembly took place an interesting clash between Hovik Abrahamyan and the ARF deputies. Abrahamyan was displeased that the ARF members corrected the Republican Party MP Arpine Hovhannisyan.
Hovik Abrahamyan advised the ARF members to talk “politely” with this “Miss” deputy.
According to the reporter of “First News and Analyses” Hovhan Mandakuni, the main reason for his aggression, however, can hardly be described with the word “gentleman”, because the ARF members didn’t say anything offensive or abusive.
“The problem is that Hovik Abrahamyan has become very sensitive, which comes, of course, from the political situation, which appeared to be quite unfavorable place for Abrahamyan. The thing is that he is rapidly losing his position in the government system.”

Reporter notes that the nervous attitude came from the fact that his chief rival Prime Minister Tigran Sargsyan was received by such person as the U.S. Vice President Joe Biden during the recent visit to the U.S., while Hovik Abrahamyan was honored in Russia with just a meeting with Matvienko.

“This is, of course, a very serious threat to the NA pretentious president. Russia didn’t even tried to counterbalance Tigran Sargsyan’s visit to the U.S.. In other words, the incumbent NA president is not only a figure, on which the superpowers bet in the multifaceted relationship with Armenian government, but also, in fact, he does not even interest these powers.”

The reporter draws a conclusion that this situation automatically shows that the foreign interest towards Abrahamyan inevitably declines. This means that he is less and less interesting for people even in here, and as a result, the defender of the interests of oligarchs Hovik Abrahamyan today can only be engaged in defending “mademoiselles”.