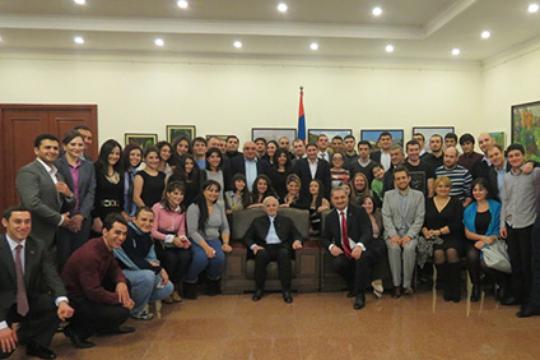 Press service of RA Foreign Ministry reported that on December 13 Armenian Embassy in China organized a meeting dedicated to French language.
As reported, Armenian famous singer Charles Aznavour was also at the meeting and he met with Armenian community in Beijing.

The source informs that about 60 Armenians were present at the meeting.
Armenian famous chess players Levon Aronyan and Elina Danielyan were also present.

Armenian Ambassador to China Armen Sargsyan was also present at the meeting and told Azvanour about Armenian community in China.
Azanvour, in his turn, told the attendants about his life and urged all them not to be away from their homeland no matter wherever they go, they must remember Armenia.