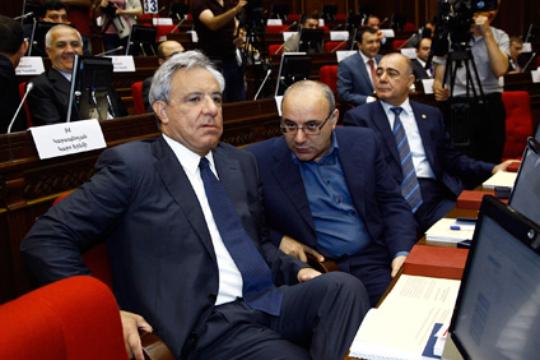 Tsarukyan’s candidacy may be the PAP’s natural dialectics

The First Armenian News and Analyses interviewed PAP member Gurgen Arsenyan about Tsarukyan’s probable candidacy and what resistance it would cause.

Arsenyan stated that it is impossible to state the consequence of his candidacy but one thing is clear. People before and after the elections confront each other and this turns to animosity. Tsarukyan evaded this confrontation with his withdrawal.
Arsenyan stated every political process has its dialectics and Tsarukyan’s candidacy could be the PAP’s natural dialectics. It does not make difference whether one is elected or not, the public problems must concern the politician always.
When asked whether Tsarukyan had the mental and other capabilities to be the president of the RA, Arsenyan told he never saw a president that would be good for the RA and Tsarukyan had all the potential to get down to the resolution of a number of problems in the country and reminded that 250.000 people immigrated from Armenia during the past 4 years.

As the PAP member states their party conducted a public monitoring to see the people’s expectations on Tsarukyan’s candidacy and came to the conclusion that people were eager to see him as a candidate. But this did not mean the party members urged Tsarukyan to put his candidacy, he must feel whether he is ready to face the political challenges. They came to the conclusion that it was not a good time for them to have a political decision.

Arsenyan also referred to the Brussels meeting the PAP members along with the head of the party had and stated they had productive meetings there to restate about the challenges Armenia faces and ways to reduce these problems. Arsenyan concluded that there were a number of inter-party decisions for further cooperation and what they actually heard from their European colleagues was the “customs corruption”. Arsenyan said nothing about the EPP leader’s statement that Tsarukyan would be a good candidate for the president.